Cyclone Nisarga Videos And Photos: See Visuals of Gusty Winds From Alibaug, Mumbai And Other Places in Maharashtra And Gujarat 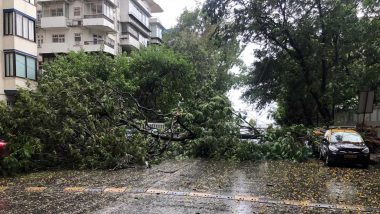 Mumbai, June 3: Cyclone Nisarga, a "severe cyclonic storm", made landfall on the Maharashtra coast at around 1 pm on Wednesday, June 3, amid heavy rainfall. The landfall process will take nearly three hours to complete, India Meteorological Department (IMD) said. The cyclonic storm was followed by heavy rains and strong winds of over 100 kmph. As Mumbaikars are witnessing the rare incident, several pictures and videos of Cyclone Nisarga are being shared on social media. Cyclone Nisarga Live Tracker And News Updates.

Several netizens took to social media to share pictures and videos of the cyclone from their homes as no one is allowed to come out in public places like parks, beaches and promenades along the Mumbai coastline. Cyclone Nisarga Landfall Started in Maharashtra, Process to be Completed in Next 3 Hours.

#WATCH: #CycloneNisarga makes landfall along the Maharashtra coast, process will be completed during next 3 hours. Visuals from Alibaug. pic.twitter.com/n5kpRtpBdS

#WATCH: #CycloneNisarga makes landfall along Maharashtra coast, process will be completed during next 3 hours. Visuals from Mumbai. pic.twitter.com/YKWizX82lC

Here Are Some Other Visuals:

Down the road from me.

(The above story first appeared on LatestLY on Jun 03, 2020 02:08 PM IST. For more news and updates on politics, world, sports, entertainment and lifestyle, log on to our website latestly.com).