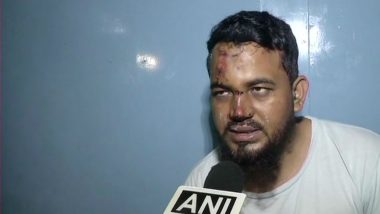 New Delhi, June 21: A man was allegedly hit by a car after he refused to chant 'Jai Shri Ram'. The incident took place Rohini Sector 20 on Thursday. An FIR has registered in connection with the "accident", while the victim Mohammad Momin was being treated at a hospital.

"Some people sitting inside the car asked me to say 'Jai Shri Ram' but I avoided them. They then verbally abused me and hit me with the car which has caused these injuries," Mohammad Momin was quoted by ANI as saying. The police, however, said they were verifying the hate crime angle. Youths of Minority Community Beaten Up in Assam's Barpeta, Forced to Shout 'Jai Shri Ram'.

"We have registered an FIR of the accident. However, Mohammad Momin has claimed that three boys who were in a white car had asked him to say some religious word, when he refused, they hit him. Now we are verifying this allegation. CCTV footage will be examined," SD Mishra, DCP Rohini, said.

(The above story first appeared on LatestLY on Jun 21, 2019 10:14 PM IST. For more news and updates on politics, world, sports, entertainment and lifestyle, log on to our website latestly.com).