Hours after a four-storeyed building collapsed in Dongri area on Tuesday, it was revealed that the BMC had issued a notice for the immediate demolition of the structure in 2017. 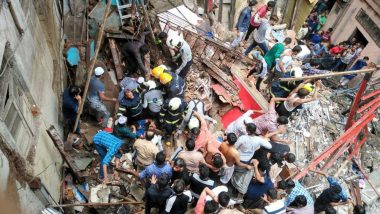 Mumbai, July 16: Hours after a four-storeyed building collapsed in Mumbai's Dongri area on Tuesday, it was revealed that the Brihanmumbai Municipal Corporation (BMC) had issued a notice for the immediate demolition of the structure in 2017. The Maharashtra Housing and Area Development Authority (MHADA) also said the 'Kesarbai' building, which collapsed, was supposed to have been demolished in 2012.

The 'Kesarbai' building, located in a densely populated narrow lane in Dongri's Tandel Street, collapsed at around 11:40 am, trapping dozens of residents under debris. While a rescue operation was underway, at least 10 persons have been confirmed dead. However, Mumbai Building Repairs and Reconstruction Board (MBRRB) Chairman Vinod Ghosalkar said at least 12 people were dead. But this claim has not been officially verified.

The BMC had given a notice to the residents to vacate the 'Kesarbai' building in August 2017. The notice had stated that the structure was classified as 'C1' and was supposed to have been demolished immediately. "In event of any mishap this office won't be responsible," the civic body had told residents. MHADA chairman Uday Samant blamed the builder for not carrying out the redevelopment work. Mumbai: Portion of Under-Construction Building Collapses in Nagpada.

Samant said the 'Kesarbai' building that is owned by MHADA was to be demolished by a private developer. He said that MHADA had given a No Objection Certificate to the developer in 2012 for its redevelopment. "Strict action will be taken, no one will be spared...the developer and our officials should have seen the work," he was quoted as saying.

The ill-fated building is mysteriously omitted from a comprehensive list of 499 "dangerous" buildings prepared by the BrihanMumbai Municipal Corporation (BMC), said an RTI activist.

(The above story first appeared on LatestLY on Jul 16, 2019 06:28 PM IST. For more news and updates on politics, world, sports, entertainment and lifestyle, log on to our website latestly.com).