A team of National Disaster Response Force (NDRF) has rushed to the building collapse site in Dongri. The cause of the incident is unknown. However, assumptions are being made that it is due to the incessant rain in Mumbai. More details awaited. 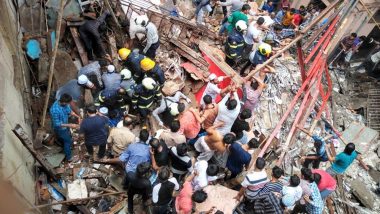 Mumbai, July 16: In a tragic incident, at least four people have been killed and several have been rescued so far, after a four-storey building collapsed in Dongri area of Mumbai at 11 AM on Tuesday. Reports inform that eight people have been injured while many are feared trapped according to a tweet by ANI. As soon as the incident was reported, fire tenders were rushed to the site. Reports suggest that the Kesarbai building collapsed at Tandel street, Abdul Hamid Durga in Dongri. A team of National Disaster Response Force (NDRF) has rushed to the building collapse site in Dongri. Mumbai: Portion of Under-Construction Building Collapses in Nagpada.

Prime Minister Narendra Modi took to Twitter to extend condolences to the families of the deceased. "Collapse of a building in Mumbai’s Dongri is anguishing. My condolences to the families of those who lost their lives. I hope the injured recover soon. Maharashtra Government, NDRF and local authorities are working on rescue operations & assisting those in need", the Prime Minister tweeted.

Maharashtra Chief Minister Devendra Fadnavis said as per the initial information, around 15 families are feared trapped in the collapse. "The building is around 100 yrs old. The entire focus is on rescuing the people trapped. Investigation will be done", Fadnavis said.

The BMC Disaster Management Cell informed that over 40 people are feared trapped. The cause of the incident is yet to be ascertained. However, assumptions are being made that it is due to the incessant rain in Mumbai. More than 40-50 people are likely to be trapped in the debris. Chief Public Relation Officers (CPRO), of BMC said that the civic body has opened a shelter at Imamwada Municipal Secondary Girls' School to help affected people after the building collapsed in Dongri.

Earlier this month, parts of a commercial building on Mama Parmanand Road, Charni Road fell,  creating panic among residents. On July 8, a building collapsed in Shivaji Nagar of Mumbai in which five people were injured. Over 20 people were sleeping inside the building when it collapsed. Two people, who were trapped inside the building, were safely rescued. All the injured were dmitted to a nearby Rajawadi Hospital.

(The above story first appeared on LatestLY on Jul 16, 2019 12:18 PM IST. For more news and updates on politics, world, sports, entertainment and lifestyle, log on to our website latestly.com).