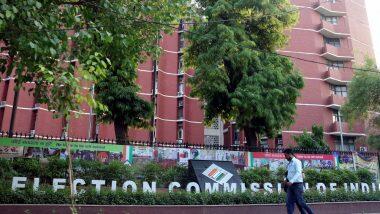 New Delhi, December 1: Non-Resident Indians (NRIs) may soon be able to cast their votes through postal ballots. According to a report, the Election Commission of India (ECI) has conveyed to the Ministry of Law and Justice that it is "technically and administratively ready" to extend the Electronically Transmitted Postal Ballot System (ETPBS) to NRI voters for upcoming assembly elections in Assam, West Bengal, Kerala, Tamil Nadu and Puducherry. EVMs Vulnerable to Hacking, Return to Ballot Paper: Petition in Supreme Court.

Presently, NRIs can only cast their votes in the constituencies where they are registered as voters. However, under ETPBS, the postal ballot is dispatched electronically and returned via ordinary mail. The facility is currently available only to service voters. If the government accepts proposals of the ECI, Indians residing abroad, who are eligible to vote, will have to inform the Returning Officer (RO) at least five days after the notification of the election. BJP Misused EVMs to Remain in Power, Says MP Congress Leader, Demands Return of Ballot Paper.

The RO will dispatch the ballot paper electronically. The NRI voters will mark their preference on the ballot printouts and send it back attaching a declaration attested by an officer appointed by the diplomatic or consular representative of India in the country where the NRI is resident, according to The Indian Express. To allow this, the government only needs to amend the Conduct of Election Rules 1961.

It remains unclear if the voter will return the ballot paper herself through ordinary post or the Indian Embassy collect them and send them to the concerned state. There have been disagreements among political parties over permission to NRIs to cast votes through postal ballots.

(The above story first appeared on LatestLY on Dec 01, 2020 09:10 AM IST. For more news and updates on politics, world, sports, entertainment and lifestyle, log on to our website latestly.com).