Ganeshotsav 2019: Ban on Bursting Firecrackers at Public Places in Hyderabad During Ganesh Chaturthi 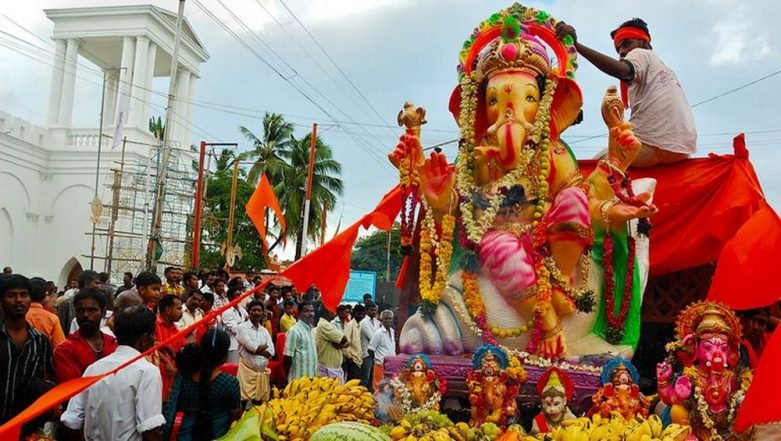 Hyderabad, August 20: The Hyderabad Police has prohibited bursting of firecrackers at public places on the occasion of Ganesh Chaturthi starting from September 2. According to an ANI tweet, Anjani Kumar, Commissioner of Police said, "Bursting of fireworks on public roads and public places is strictly prohibited from 6 am on September 2 -12. Ganeshotsav 2019: Ganpati Idol Makers Suffer Huge Losses Due to Floods in Maharashtra.

A week back, TRS working president KT Rama Rao took to Twitter to share an idea from Ahmedabad that people in Hyderabad can emulate to protect lakes from pollution due to the immersion of Ganesh idols. Rao shared a tweet by Amdavad Municipal Corporation commissioner Vijay Nehra on how residents of the region decided to keep the Sabarmati clean by not immersing idols of goddess Dashama in the river. Rather, they left the idols on the river bank, to be later removed by the municipal authorities. He urged people in Hyderabad to take a lesson from Ahmedabad and emulate the same during Ganesh Utsav 2019.

In Mumbai, civic authorities have asked the Ganesh Puja pandals to avoid singing and dancing on weak bridges during the immersion procession. Reportedly, this has been done keeping in mind, the damage to the structural place or collapse that can happen due to dancing.

The idol makers in the city have suffered huge losses this year due to floods in Maharashtra. The idol markers are reeling under huge losses as rains have swept away the raw materials and also a year's earnings.