In a major relief to commuters and stranded people, the Haryana government has allowed movement of intrastate and inter-state buses. 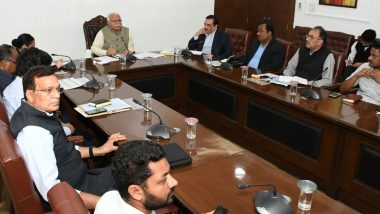 Chandigarh, May 19: The Haryana government, headed by Chief Minister Manohar Lal Khattar, has announced a slew of relaxations in the fourth phase of lockdown across India which will remain enforce till May 31. In a major relief to commuters and stranded people, the Haryana government has allowed movement of intrastate and inter-state buses during the lockdown. Under the revised guidelines, relaxations will come into effect from today. Coronavirus Negative Test Report Must For Entering Haryana, Says State Home Minister Anil Vij.

CM Manohar Lal Khattar on Monday said under the new guidelines of the Ministry of Home Affairs, intrastate and inter-state passenger vehicles and buses have been allowed to run but with mutual understanding. Keeping this in view, the state decided to run buses on the regular routes between Haryana cities and the states. Hence, the state government has sought the consent of the neighbouring states to restart the inter-state bus service. Lockdown 4 Guidelines: What is Allowed and Not Allowed Till May 31? See Full List Issued by MHA.

The state has written letters to Uttar Pradesh, Rajasthan, Punjab, Himachal Pradesh, Madhya Pradesh, Uttarakhand, Delhi and Chandigarh for seeking their permission for a to and fro movement of the commuters, a state Transport Department spokesperson told IANS. It has already started to and from special buses between district headquarters and the national capital.

What's Allowed And Not Allowed During Lockdown 4 in Haryana:

CM Khattar has also allowed government schools to open their offices to carry out administrative functions during the lockdown, while ensuring strict compliance of norms for the containment of COVID-19. He also announced to provide superior quality PPE kits, N-95 masks and hand sanitizers to private doctors at the government rates. Haryana has reported close to 1000 coronavirus cases so far, including 14 deaths.

(The above story first appeared on LatestLY on May 19, 2020 10:32 AM IST. For more news and updates on politics, world, sports, entertainment and lifestyle, log on to our website latestly.com).