The entire episode was caught on a CCTV camera. The victim's family members approached the police station and registered a complaint. 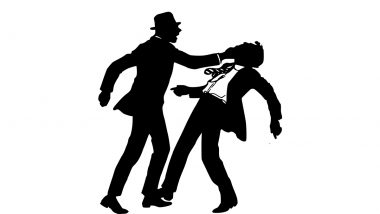 Hisar, May 9: In a shocking incident, an 18-year-old boy was attacked with sticks and iron rods by a group of 12 to 14 persons at his father’s shop in Uklana town of Hisar on Sunday. The incident took place when the victim was taking care of their shop in his father's absence.

As per the report published by the Hindustan Times, the victim was identified as Mohit Kumar, a student of Class 12. He suffered injuries and is undergoing treatment at a hospital in Hisar. The entire episode was caught on a CCTV camera. The victim's family members approached the police station and registered a complaint. Faridabad Shocker: 24-Year-Old Law Student Thrashed, Stabbed to Death by Friends Over Old Enmity.

On the basis of the complaint, a case under relevant sections of the Indian Penal Code (IPC) was lodged against unknown persons. We have filed an FIR and a probe is underway. The exact reason behind the incident has yet to be ascertained, said the police

(The above story first appeared on LatestLY on May 09, 2022 04:42 PM IST. For more news and updates on politics, world, sports, entertainment and lifestyle, log on to our website latestly.com).