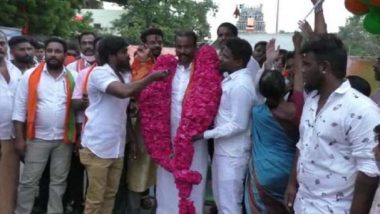 Chennai, September 19: As many as 30 Bharatiya Janata Party (BJP) workers were injured after helium balloons exploded during Prime Minister Narendra Modi's birthday celebrations on September 17. The incident was reported from Chennai on Friday. Reports inform that the event was conducted by BJP farmer association functionary near Chennai’s Ambattur. The injured BJP workers were immediately rushed to a nearby hospital.

According to a video released by ANI, a spark rom fireworks resulted in an explosion of gas-filled balloons. The workers standing near the balloons suffered minor injuries from the explosion. The video of the incident, that took place on September 17, has now gone viral on the social media platforms.  Narendra Modi Birthday: Prime Minister Thanks Amul For Special Wish Video, Says 'Your Wishes Are as Sweet as Your Ice Creams and Chocolates'.

According to a report by Indian Express, as many as 100 people were gathered at Padavattamman Koil street at Padi to welcome Muthurama, deputy leader of the agricultural team. However, on his arrival, a spark from fireworks resulted in explosion of gas-filled balloons. People standing near the balloons suffered burn injuries. The report quotes Inspector of Korattur police station as saying that people were holding hundreds of balloons filled with hydrogen gas and were planning to release 2000 balloons into the air, but did not get permission from the police.

(The above story first appeared on LatestLY on Sep 19, 2020 12:05 PM IST. For more news and updates on politics, world, sports, entertainment and lifestyle, log on to our website latestly.com).