Himachal Pradesh Chief Minister Jairam Thakur said on Monday that his government is examining the possibility of implementing Uniform Civil Code (UCC) in the state. 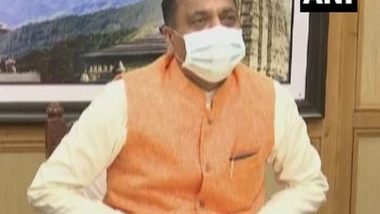 Interacting with the media here, Thakur said: "I think UCC is a good decision. We are examining how to implement the UCC in the context of Himachal Pradesh. A decision will be taken in the future."

Thakur, however, is non-committal on whether UCC will be implemented before the Assembly polls or not. "We are not ruling out, we are examining how it will be implemented or how it can be better. We have not constituted a committee for the purpose but told the official to examine it to find out how it will be done. Decision will be made after properly studying it. He said that after Uttarakhand, Himachal Pradesh started active consideration to implement implement UCC.

He alleged that in absence of leadership, the AAP is importing leaders from Punjab and Delhi and they insulted people of Himachal Pradesh by not allowing any of their state leaders to share the vehicle in Kejriwal's road shows. "They have failed to form a state unit after their leaders left the party and sent leaders from Punjab and Delhi to manage its affairs in Himachal Pradesh. During road shows in Mandi Kangra, no AAP leaders allowed to share 'rath' with Kejriwal. Himachal is a small state but people have self-respect and will take any insult from others," the chief minister said. COVID-19 Outbreak in Karnataka: CM Basavaraj Bommai To Hold High-Level Meeting.

Referring to Kejriwal's promise to give corruption-free administration, Thakur said: "In the last four-and-a-half-years, there has not been a single allegation of corruption against our government. AAP's style of politics will not work there. Talking about recent Assembly polls in five states, Thakur said: "In recent Assembly polls, the BJP has formed a government in four out of five states by winning a second consecutive term. 'Riwaz Badal gaya hai' (tradition has changed) and in Himachal Pradesh also BJP will form the government for a second term."

Commenting on the politics of freebies, Thakur said: "Within a month AAP will face huge challenges to implement freebies announced in Punjab. On Himachal Pradesh Day, we made an announcement which will be beneficial to some sections of people but not to everyone."

(The above story first appeared on LatestLY on Apr 25, 2022 02:26 PM IST. For more news and updates on politics, world, sports, entertainment and lifestyle, log on to our website latestly.com).