Independence Day 2020: NOTAM at Delhi International Airport Only For Chartered Flights, No Transit Flights to Land During These Timings on August 15; Check Details 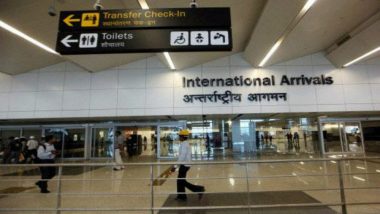 Delhi, August 14: On the occasion of Independence Day on Saturday, as per the notice to airmen (NOTAM) has been issued for Delhi International Airport (IGI) for chartered (non-scheduled) flights, no transit flight will be allowed to land between 6:00 am-10:00 am and 4:00 pm-7:00 pm on August 15. Scheduled flights will, however, continue to operate as per schedule.

There would be no impact on IAF, BSF, Army helicopter. The state-owned Aircraft/Helicopter can fly with Governor/Chief Minister of the state. Delhi Police Issue Traffic Advisory For August 15; Here is The Complete List of Roads to be Closed on Saturday.

No Transit Flight Allowed to Land at Delhi Airport During These Timings:

As per notice to airmen (NOTAM) issued for Delhi International Airport (IGI) for chartered (non-scheduled) flights, no transit flight allowed to land between 6:00am-10:00am and 4:00pm-7:00 pm on Independence Day, 15th August. Scheduled flights to operate as per schedule.

Ahead of the Independence Day celebrations on August 15, security has been beefed up in Delhi-NCR with multi-layered arrangements and strict vigil at the border areas. Apart from this, agencies like NSG, SPG and ITBP have been put on high alert. Indian Independence Day 2020 Date, Theme And Significance: Know The History And 15th of August Celebrations Related to Swatantrata Diwas.

President Ram Nath Kovind will address the nation on the eve of 74th Independence Day. The address will be broadcast from 07:00 pm onwards on the entire national network of All India Radio (AIR) and overall Doordarshan channels in Hindi, followed by the English version, it said.

(The above story first appeared on LatestLY on Aug 14, 2020 09:09 AM IST. For more news and updates on politics, world, sports, entertainment and lifestyle, log on to our website latestly.com).