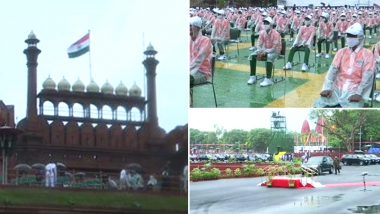 New Delhi, August 13: A full dress rehearsal for the 74th Independence Day celebrations was held at the historic Red Fort in Delhi on Wednesday morning. In the view of the dress rehearsal, Delhi Police has issued a traffic advisory to ensure safe and smooth vehicular movement across the national capital. As per the advisory, the roads closed for general traffic from 4 am to 10 am in the morning. Indian Independence Day 2020 Date, Theme And Significance: Know The History And 15th of August Celebrations Related to Swatantrata Diwas.

The roads which were closed due to the full dress rehearsal for the 74th Independence Day celebrations, include Netaji Subhash Marg, Lothian Road, S P Mukherjee Marg, Chandni Chowk Road, Ring Road from Rajghat to ISBT and its Link Road. Notably, the same traffic restrictions will be imposed on August 15. Independence Day 2020: Delhi Police Issues Traffic Advisory for August 13 and August 15; Check List of Roads to Avoid, Alternative Routes and Diversions.

In view of coronavirus situation prevailing in the country, Delhi police have requested the invitees to follow guidelines issued by the Home Ministry and Health Ministry while attending the function at Red Fort. The Independence Day Ceremony will be celebrated on August 15. Prime Minister Narendra Modi will hoist the Tricolour and address the nation from the rampart of Red Fort.

(The above story first appeared on LatestLY on Aug 13, 2020 10:54 AM IST. For more news and updates on politics, world, sports, entertainment and lifestyle, log on to our website latestly.com).