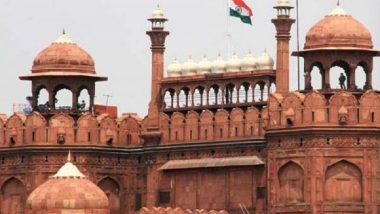 New Delhi, August 13: Ahead of Independence Day 2020, banned United States-based pro-Khalistani organisation ‘Sikhs For Justice’ (SFJ) has announced a reward for anyone who would raise Khalistan flag at Red Fort in New Delhi on August 20, 2020. The terrorist outfit said that if someone hoists the Khalistan flag, they will be awarded a reward of USD 125,000. Following the announcement, the Delhi Police has increased its vigilance.

In a statement, SFJ chief Gurpatwant Singh Pannun claimed that August 15 was not the Independence Day for Sikhs as it reminds them of atrocities they faced during the 1947 partition. Home Ministry Declares Nine Individuals ‘Designated Terrorists’ for Trying to Revive Militancy in Punjab.

“Nothing changed for us, but the rulers. We are still labelled as Hindus in the Indian Constitution and natural resources of Punjab were being unjustly appropriated for other states. We need true independence,” Pannun said.

Pannun is among the nine-pro Khalistani activities designated as terrorists by the Ministry of Home Affairs, Government of India, last month. In last two months, six FIRs have been registered against Gurpatwant Singh Pannun and his associates.

Pannun is actively promoting the Referendum 2020, demanding a separate state for Sikh community. He claims that it is legal under the Global Declaration of Human Rights. Meanwhile, security has been tightened in India ahead of 74th Independence Day.

(The above story first appeared on LatestLY on Aug 13, 2020 04:51 PM IST. For more news and updates on politics, world, sports, entertainment and lifestyle, log on to our website latestly.com).