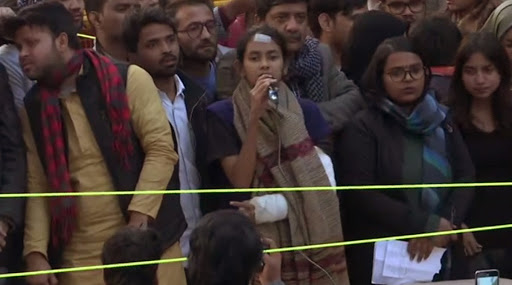 New Delhi, January 15: Jawaharlal Nehru University Students Union chief Aishe Ghosh on Wednesday said that students should not forget the case of Kashmir in their fight against violence in varsities and saving constitution. She said that what's happening with Kashmiris is related with government's action to meddle with the constitution.

Addressing a gathering outside Jamia Millia Islamia, Ghosh said, as quoted by news agency ANI, "We cannot forget Kashmir in our fight (to save constitution). Whatever is happening with them (People of Kashmir), from there onwards the government has begun to meddle with the constitution." JNU Violence: JNUSU President Aishe Ghosh Says ‘False Narrative Being Created’ After Delhi Police Name Her for Violence.

Earlier in the day, JMI PRO Ahmad Azeem said, "University's Executive Council has given the mandate to administration to move court against the entry of police in library & violence against students on 15th December. We will seek registration of FIR in this case."

Meanwhile, Delhi Police Crime branch's Special Operations Team on Wednesday called Chunchun Kumar and Dolan Samanta to join the investigations, said a senior Crime branch officer. They were named as suspects by the Delhi Police in the violence that broke out in the campus on January 5.

Also, efforts were being made to trace Akshat Awasthi, Rohit Shah and Komal Sharma, who were summoned by the police after a private news channel allegedly 'unmasked' them. However, Komal Sharma registered a complaint with National Commission for Women (NCW) against the news channel, stating that she was never approached by that channel for the confirmation or clarification in the alleged matter.