A Kerala-based man ordered a passport cover from Amazon. However, along with the cover he also received an original passport of another man. He contacted the customer care services but did not receive any satisfactory response. 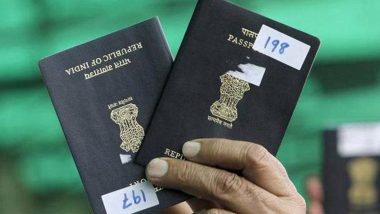 Thiruvananthapuram, November 5: In a bizarre incident, a man, who had ordered a passport cover from a e-commerce website, received an original passport of another man along with the product. According to reports, Mithun Babu, a native of Kaniyambetta in Wayanad district of Kerala, had placed an order for a passport cover with Amazon on October 30. When he received the order on November 1, he discovered a original passport along with the cover. He contacted the customer care services but did not get a satisfactory response. Man Orders Football Stockings from Myntra, Claims That He Received Triumph Bra (Read Tweet).

According to a report by India Today, the original passport that Babu received belongs to another Kerala-based man - Mohammad Salih, a native of Thrissur district of the state. Babu reportedly said that the passport cover he received might have previously ordered by Salih and he might have placed his passport in the cover. However, it seems that Salih forgot to take out his passport from the cover before returning it.  Man Eats Cowdung Cake From Amazon And Reviews It 'Very Bad' as He Got Loose Motions, Bizarre Review Goes Viral.

"When he didn't like the product, he replaced it without taking back the passport. The returned product was not properly inspected by the seller and they sold it when they received another order," Babu was quoted as saying by India Today. On contacting the customer care services, he was though assured that such thing would not be repeated again but was not guided as to what to do with the passport. Following which, he contacted the passport owner as per the details in the document.

(The above story first appeared on LatestLY on Nov 05, 2021 10:01 AM IST. For more news and updates on politics, world, sports, entertainment and lifestyle, log on to our website latestly.com).