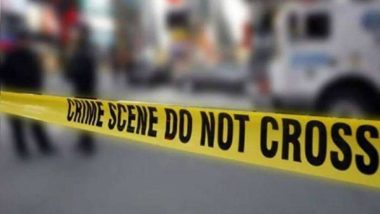 Rewa, October 17: In a shocking incident, a 35-year-old man from Madhya Pradesh killed his wife and one-year-old daughter in a fit of rage and chopped their bodies into 22 pieces. The incident took place in Rewa district of Madhya Pradesh. The accused was identified as Chindalal Saket. Madhya Pradesh Man Hires Contract Shooter to Kill Wife and Daughter, Later Commits Suicide.

He was arrested on Friday when he was disposing of the bodies. According to a report published in Hindustan Times, Saket doubted his wife of infidelity. He strangled his daughter. The accused reportedly slit the throat of his wife with a sharp-edged weapon on Wednesday. Madhya Pradesh Shocker: Woman, Minor Daughter Gangraped by Unidentified Men in Burhanpur District.

“He cut the bodies into at least 22 pieces and covered it in a piece of cloth. He cleaned the room where he killed them. He pretended to be normal and interacted with villagers throughout the day on Thursday,” reported the media house quoting Rewa police superintendent Rakesh Singh as saying. It was Saket's second marriage. His first wife died almost eight years ago.. He then married his brother's widow.  Saket told police that he was suffering from tuberculosis.

On Thursday night, he went to throw the bodies in a forest. As the bodies had started stinking, villagers asked him what he was carrying in a cloth. When Saket tried to dodge the questions, the villagers get hold of him and found out pieces of bodies. They later informed the police. Saket was taken into custody and was produced before a court on Friday. He was end to judicial custody by the court.

(The above story first appeared on LatestLY on Oct 17, 2020 05:12 PM IST. For more news and updates on politics, world, sports, entertainment and lifestyle, log on to our website latestly.com).