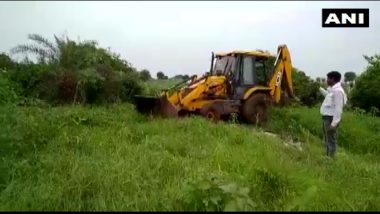 Soon after the women attempted self-immolation, she was taken to the nearest hospital, where her condition is now stable. Informing about the woman's health, Additional SP of Dewas said, as quoted by news agency ANI, "Woman sustained minor injuries and was rushed to hospital by locals." Madhya Pradesh: Jobless Son Slits Mother's Throat in Rewa as ‘She Loved Elder Son More’, Films Murder on Mobile Phone.

Here are a few images of Dewas incident:

Dewas: Woman attempts self-immolation after anti-encroachment drive through her farm. Husband (pic 1) says officials were trying to cut out road from their land.

According to a report, published by Times of India, the revenue department team was removing crops sown over the government land on Tuesday. After this, a group of people protested against the action taken by the government. In the meantime, the women set herself afire. Following this, the group turned violent and started pelting stones at the officers.

(The above story first appeared on LatestLY on Jul 30, 2020 12:14 PM IST. For more news and updates on politics, world, sports, entertainment and lifestyle, log on to our website latestly.com).