The Ministry of Defence on Friday appointed Colonel Amit Anand as its acting official spokesperson. The ministry sent the incumbent spokesperson, Swarnashree Rao Rajshekhar to leave after she posted a controversial tweet while replying to former Naval Chief Admiral Arun Prakash. 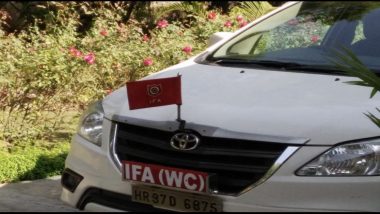 On Friday, the former Naval Chief retweeted highlighting the misuse of military insignia by civilian officers. The tweet had a visual of a car having the flag of Internal Financial Advisor (IFA) attached to the Indian Army’s Western Command. The image went viral on social media as bureaucrats cannot use these insignias. Indian Ministry of Defence Website mod.gov.in Not hacked, Clarifies NIC: Home Page Displayed Chinese Characters

Even if misuse of an Army Command's insignia by a civilian is not a cognizable offence, the person needs to be reprimanded by the GOCinC whose "Financial Adviser" he is. https://t.co/sxyM13miOH

Responding to Admiral (Retd) Prakash’s tweet. Rajshekhar tweeted, “What about misuse of jawans in your residence during an officer's tenure sir? And how about children being picked up and dropped to school in Fauji gaadis? Not to forget Madam's shopping expedition on government vehicles. And endless parties...who pays for that?” Military veterans strongly condemned the spokesperson's tweet. Later, Rajshekhar deleted the tweet and apologised.

(The above story first appeared on LatestLY on Oct 26, 2018 09:22 PM IST. For more news and updates on politics, world, sports, entertainment and lifestyle, log on to our website latestly.com).