Minister of State for Defence Subhash Bhamre told the Lok Sabha that the ministry has initiated the process of preparing Indian defence forces for Artificial Intelligence and leveraging India's capabilities in machine learning sectors. 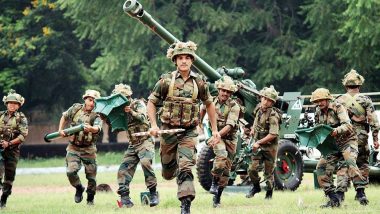 New Delhi, Aug 1: India is considering the military usage of Artificial Intelligence for national security and military strategic purposes and the government is studying a report recommending the dual use of technology in aviation, naval, land systems, cyber, nuclear and biological warfare.

Minister of State for Defence Subhash Bhamre told the Lok Sabha that the ministry has initiated the process of preparing Indian defence forces in their use of Artificial Intelligence and leveraging India's capabilities in machine learning sectors. WhatsApp Payment Service to Be Delayed? Facebook Owned Company Needs to First Set Up an Office in India.

This, he said, has a potential to fuel technology-driven economic growth and provide military superiority.

The group led by Natarajan Chandrasekharan, Chairman Tata Sons, was tasked to prepare a roadmap for Artificial Intelligence for national security purposes.

The Task Force submitted its report on June 30 after studying the level of Artificial Intelligence development in India in general and specifically in the context of defence needs. After Fake News Speculation, IT Secretary Ajay Kumar Sawhney Calls for More Stringent Rules on WhatsApp.

The group has made recommendations relating to making India a significant power of Artificial Intelligence for both defensive and offensive needs, Bhamre said.

The group has also made recommendations for policy and institutional interventions required to regulate and encourage robust Artificial Intelligence-based technologies for the defence sector in the country.

(The above story first appeared on LatestLY on Aug 01, 2018 07:17 PM IST. For more news and updates on politics, world, sports, entertainment and lifestyle, log on to our website latestly.com).