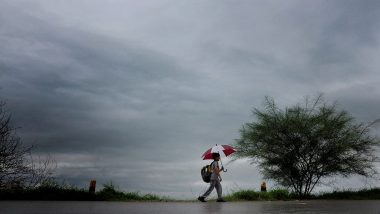 New Delhi, August 2: Widespread rainfall activity with very heavy rainfall is expected to lash parts of Madhya Pradesh, Rajasthan, and several states in North India in the coming days, the India Meteorological Department (IMD) said in its latest weather forecast. The IMD said that very heavy rainfall is very likely over Madhya Pradesh and Rajasthan from August 2 to August 5.  The IMD forecast stated that isolated extremely heavy rainfall is very likely over West Madhya Pradesh on August 2 and 3, 2021 with a reduction from August 5. What Is a Landslide? What Causes a Landslide and What Are the Factors Responsible for It? All You Need To Know.

The current spell of rainfall is likely to continue over the rest of parts of North India with heavy rainfall over Uttarakhand and West Uttar Pradesh on August 2 with isolated heavy thereafter. Also, heavy rainfall is likely over Haryana during August 2-5 and over Himachal Pradesh during August 2-4. The IMD said that a well-marked low-pressure area lies over southeastern parts of West Uttar Pradesh with a cyclonic circulation extending up to 7.6 km above mean sea level. What Is a Cloudburst? How Does It Occur? All You Need To Know About the Sudden Copious Rainfall.

(The above story first appeared on LatestLY on Aug 02, 2021 11:45 AM IST. For more news and updates on politics, world, sports, entertainment and lifestyle, log on to our website latestly.com).