What Is a Landslide? What Causes a Landslide and What Are the Factors Responsible for It? All You Need To Know

Landslide materials also have the capability to block rivers and increase the risk of floods. The impact and consequences of a landslide can be extensive, including loss of life, causing massive damage to infrastructure, damage to land and also loss of natural resources. 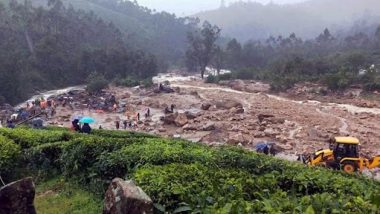 New Delhi, July 30: Landslides, floods, cloudbursts, rockslides, triggered by torrential rainfall have been reported from parts of India, especially from the hill states including Himachal Pradesh, Uttarakhand, Jammu and Kashmir. The recent floods and incessant rains in Maharashtra and Goa, rockslides and cloudbursts in Himachal Pradesh and Jammu and Kashmir, excessive rainfall in Uttarakhand indicate the increasing intensity of the extreme weather events across the Indian landscape. What Is a Cloudburst? How Does It Occur? All You Need To Know About the Sudden Copious Rainfall.

On July 25, a massive landslide was reported from the Kinnaur district in  Himachal Pradesh in which as many as nine tourists were killed and scores were injured.  several injured. Uttarakhand has been reporting a series of landslides ever since the beginning of the month. Since July 22, with the record-breaking rainfall reported along with the western coast, as many as 213 deaths were reported in Maharashtra due to landslides, floods, and other rain-related incidences.

What is a Landslide?

A landslide is the movement of rock, earth, or debris down a sloped section of land. Landslides are caused by rain, earthquakes, volcanoes, or other factors that make the slope unstable. Experts also term landslides as one type of 'mass wasting'. It denotes any down-slope movement of soil and rock under the direct influence of gravity.

Landslides are classified into four main types- fall and toppling, slides (rotational and translational), flow, and creep. They can be fatal as landslides are unpredictable natural disasters. Cloudbursts, That Are Increasingly Affecting Life in Himalayan Foothills, Linked to Forest Fires: Study.

What Causes a Landslide?

Landslides are caused by disturbances in the natural stability of a slope. They are usually triggered by heavy rainfall over a region, earthquakes, or volcanic eruptions, poor infrastructure, changes in groundwater, disturbance by human activities, soil erosion among other reasons.

Landslide materials also have the capability to block rivers and increase the risk of floods. The impact and consequences of a landslide can be extensive, including loss of life, causing massive damage to infrastructure, damage to land and also loss of natural resources.

Experts warn that the monsoon rains would increase further with an increase in global temperatures. The major causes that have led to landslides in several states across India is deforestation and rapid urbanisation. In the hill states of India, deforestation and massive construction of hydropower plants, roads, hotels or homes have led to the loosening of soil, resulting in frequent landslides even with the slightest of rains.

(The above story first appeared on LatestLY on Jul 30, 2021 05:11 PM IST. For more news and updates on politics, world, sports, entertainment and lifestyle, log on to our website latestly.com).