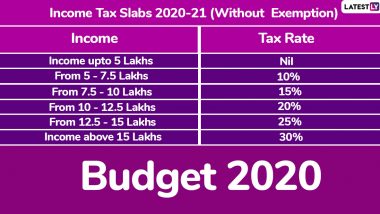 "In this new personal income tax regime, income tax rates will be significantly reduced for the individuals who forgo certain exemptions and deductions," Nirmala Sitharaman announced. At present, individual taxpayers pay 5 percent tax on income between Rs 2.5 and 5 lakh, 20 percent on income between Rs 5 lakh and Rs 10 lakh and 30 percent on earnings of over Rs 10 lakh. "A person earning between Rs 5-7.5 lakhs will be required to pay tax at 10 percent against current 20 percent," Sitharaman said.

In 2014, then Union Finance Minister Arun Jaitley, presenting his first Budget, increased the tax exemption limit from Rs 2 lakh to Rs 2.5 lakh for people below 60 years of age and for senior citizens, the limit was increased to Rs 3. Jaitley also raised the maximum deduction limit under Section 80C from Rs 1 lakh to Rs 1.5 lakh. The 10 percent, 20 percent and 30 percent tax slabs for income between Rs 2.5-Rs 5 lakh, Rs 5 lakh-Rs 10 lakh and above Rs 10 lakh were kept unchanged respectively.

In 2016, Jaitley raised the maximum tax rebate from Rs 2,000 to Rs 5,000 for people having taxable income of up to Rs 5 lakh. The rate of surcharge on income exceeding Rs 1 crore was increased from 12 percent to 15 percent.

In 2017, Jaitley reduced the minimum income tax rate from 10 per cent to 5 percent for income upto Rs 2.5 lakh. He also introduced 10 percent surcharge on income between Rs 50 lakh and Rs 1 crore, while the rate of surcharge on income exceeding Rs 1 crore was kept unchanged at 15 percent.

In 2018, tax slabs, rates and income tax exemption limit were not changed. In 2019, then interim Finance Minister Piyush Goyal increased the tax rebate from Rs 2,500 to Rs 12,500 for taxpayers having taxable income up to Rs 5 lakh, which effectively ensured that they don't have to pay any tax.

(The above story first appeared on LatestLY on Feb 01, 2020 03:25 PM IST. For more news and updates on politics, world, sports, entertainment and lifestyle, log on to our website latestly.com).