"On the basis of democratic values, Quad with positive ideas and a positive approach is determined to move forward," Modi said on Friday at the White House seated around a flower-bedecked island with the other leaders, President Joe Biden and Prime Ministers Yoshihide Suga of Japan and Scott Morrison of Australia. 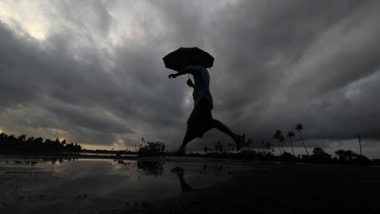 New Delhi, September 25: Heavy rainfall is expected to lash Odisha, Andhra Pradesh and several regions in South India over the next few days due to a deep depression over the Bay of Bengal, India Meteorological Department (IMD) said in its latest weather forecast. In the wake of the current weather conditions, the IMD has issued a yellow alert for north Andhra Pradesh and adjoining south Odisha coasts. The weather agency said that many parts of Odisha will receive heavy rainfall during the next five days and squally wind speed reaching 40-50 kmph gusting to 60 kmph is likely along and off Odisha coasts from Saturday morning. Cyclones, Hurricanes And Typhoons: Know The Difference And How Are They Classified.

Under the influence of the above systems; Here's a day-wise forecast

The fishermen are advised not to venture into east-central & adjoining the northeast Bay of Bengal and the Andaman Sea on September 25 and into northwest and adjoining the west-central Bay of Bengal and along & off Odisha, West Bengal & North Andhra Pradesh coasts till September 27. The IMD said that rainfall activity is very likely to increase over Kerala and Mahe with fairly widespread to widespread rainfall and isolated heavy rainfall from September 25, 2021 and over Lakshadweep area from September 26, 2021.

Under the influence of the cyclonic circulation over east-central Bay of Bengal and its neighbourhood, a low-pressure area had formed over the same region, which became well-marked and subsequently concentrated into a depression. The IMD, in a special bulletin, said that it would intensify into a 'Deep Depression' during the next 12 hours and intensify further thereafter.

(The above story first appeared on LatestLY on Sep 25, 2021 08:58 AM IST. For more news and updates on politics, world, sports, entertainment and lifestyle, log on to our website latestly.com).