Fintech giant Paytm's parent company One97 Communications Limited is headed for a $3 billion initial public offering (IPO), the highest ever market debut in India, and while the market leader has established its presence across a plethora of businesses, its competitors are only now exploring an expansion into other services. 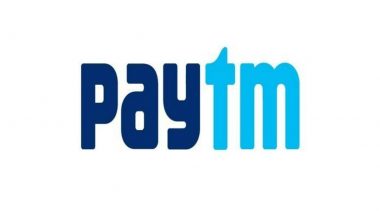 New Delhi, June 2: Fintech giant Paytm's parent company One97 Communications Limited is headed for a $3 billion initial public offering (IPO), the highest ever market debut in India, and while the market leader has established its presence across a plethora of businesses, its competitors are only now exploring an expansion into other services. The company, which has been a public limited company for long, is expected to list in the Indian stock market by November.

The company has leveraged its multi-payment architecture, and sees revenues that are multiple times higher than any other company in the digital payments and financial services category. "Paytm's strong merchant focus -- merchant and inventory integrations within the wallet, merchant point of sale, online payments and consumer cross-sell has led to a strong revenue base for Paytm versus its UPI-focussed competitors. Paytm earns 10X to 15X more revenue per active user, relative to its UPI-focussed competitor payment apps," said a recent report by global analysis firm Bernstein.

In India, while most fintech companies have so far been targeting a particular business model, Paytm, led by Vijay Shekhar Sharma, has diversified its businesses from mobile, broadband, DTH recharges and P2P transfers and today offers a gamut of financial services. Within the payments space, the company operates its wallet, banking, UPI, postpaid services and much more. But it's not just that. Paytm has gone on to add a plethora of businesses -- Paytm Payments Bank, Paytm Payments Gateway, Paytm Payout, Paytm Money for democratizing wealth creation, Paytm Insurance, Paytm Postpaid, Paytm Credit Cards along with utility bill payments, offline merchant payments, content and gaming service. Paytm To Provide 100 Oxygen Concentrators to Madhya Pradesh in Next 2-3 Days Amid COVID-19 Crisis.

"With its presence in a large number of allied financial services, it (Paytm) has been successful in becoming the largest player in terms of consolidated revenue. Also, an important distinction to be noticed is that most of the ancillary services of Paytm are offered through in-house establishments such as Paytm Money, Paytm bank, etc. This could place itself better in terms of margins in the coming times," said a recent report on the Indian fintech ecosystem by RedSeer. Paytm Waives Charges on Merchant Transactions; to Absorb MDR of Rs 600 Crore.

While it has established all of these businesses, its competitors are only now exploring an expansion into other services. Paytm, with a first-mover advantage, has already become a leader and is a brand name to reckon with. "Paytm with its long legacy has a strong presence in 'Bharat' i.e. tier 3 and below as well with total 20 Mn merchants onboard it maintains a huge lead in wallet payments especially," said the report by market research firm RedSeer.

The company is also a large player in the UPI transactions in India. UPI transactions do not become a revenue generating feature for third-party apps. "...maintaining UPI market share takes marketing dollars on a treadmill without earning any revenue," said the Bernstein report. Instead, they go through a bank funnel, and that's where Paytm Payments Bank is already the highest beneficiary bank ahead of SBI, HDFC and ICICI Bank.

The NPCI has also proposed a market cap in UPI transactions, where it has said that no player can have over 30 per cent market share by 2022. Players that don't abide by the market share rule will be penalised. However, for Paytm, UPI is just one of the services. Today, the company ends up managing the entire customer life cycle and not just a payment transfer alone. All of that contributes to several funnels for revenue growth for Paytm -- whether it's through users, online merchants or offline merchants.

The company has also recorded over 1.4 billion transactions reported in March with over 20 million merchant partners accepting Paytm QR, Paytm IoT devices and App POS. With the lockdown and restrictions across the country, users continue to turn to Paytm for all their daily needs -- from mobile, broadband and DTH recharges, credit card payments, electricity bill payments, water bill, money transfers and much mor

(The above story first appeared on LatestLY on Jun 02, 2021 03:26 PM IST. For more news and updates on politics, world, sports, entertainment and lifestyle, log on to our website latestly.com).