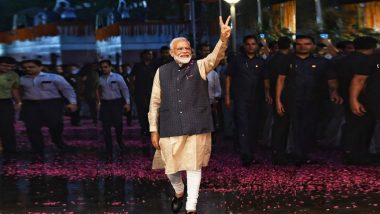 New Delhi, August 13: Prime Minister Narendra Modi set another record on Thursday by becoming the longest-serving Indian prime minister of non-Congress origin. With the new feather in his cap, the Prime Minister became the fourth longest serving PM of India. As per history, the three other ahead of Narendra Modi that had a longer tenure than him were Jawaharlal Nehru, Indira Gandhi and Manmohan Singh, all the three belonged to the Congress party. PM Modi took oath as the 14th Prime Minister of the country on May 26, 2014. He started with his second innings as the PM again on May 30, 2019.

The Prime Minister become the fourth longest-serving prime minister just two days ahead of India's 74th Independence Day. On August 15 he will deliver his seventh Independence Day speech from the ramparts of the Red Fort.

(The above story first appeared on LatestLY on Aug 13, 2020 07:01 PM IST. For more news and updates on politics, world, sports, entertainment and lifestyle, log on to our website latestly.com).