Prime Minister Narendra Modi said on Wednesday that the Central Government has approved as many as 900 new air routes under the UDAN (Ude Desh ka Aam Nagrik) scheme of which 350 have already become operational while more than 50 new airports, or those which were not in service earlier, have become operational. 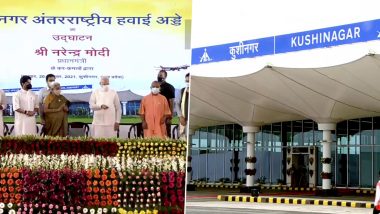 Kushinagar, October 20: Prime Minister Narendra Modi said on Wednesday that the Central Government has approved as many as 900 new air routes under the UDAN (Ude Desh ka Aam Nagrik) scheme of which 350 have already become operational while more than 50 new airports, or those which were not in service earlier, have become operational.

Bringing better infrastructure to Kushinagar and improving the quality of life for the people there. pic.twitter.com/9KTHIT0GVC

He pointed out that the goal behind all these steps is to provide better connectivity to people living in the remotest corners while air, rail, road and waterways support one another adding to people’s comfort. PM said that far more middle class people were able to avail flight services today than in the past due to the steps taken by the Government.

The Prime Minister said that the process of setting up eight new flying academies at five airports has also been started to train the youth in the aviation sector.

On policy front, Modi said that allowing defence airspace for civilians’ travel has reduced both distance and time between destinations considerably. He added: “The recently launched drone policy is going to bring life-changing transformation in the fields ranging from agriculture to health, to disaster management to the defence.”

Emphasising the importance of that developing Buddhist sites is a priority of both the Central Government and the Uttar Pradesh Government led by Chief Minister Yogi Adityanath, Modi said that the airport will provide better connectivity to Buddhist sites in both UP and Bihar for both domestic and foreign travellers because of its strategic location near Lord Buddha’s birthplace Lumbini, Kapilvastu, Sarnath where he gave his first sermon and Bodh Gaya where Lord Buddha got enlightenment.

Modi said that the recently launched PM Gatishakti - National Master Plan will not only improve governance, but also ensure that all modes of transport such as road, rail, air support each other and increase each other's capacity.

“In Uttar Pradesh, eight or nine new airports have been opened prior to the opening of Kushinagar airport. Work is in progress on Jewar International Airport. Apart from that, airport projects are going on in Ayodhya, Aligarh, Azamgarh, Chitrakoot, Moradabad and Shravasti”, PM remarked further.

Describing Kushinagar International Airport as a tribute to the devotion of Buddhists across the world, PM said that the region had been witness to the entire journey of Lord Buddha from enlightenment to Mahaparinirvana and with the opening of the airport today, it was getting connected directly to the world.

The Prime Minister also welcomed the maiden Sri Lankan flight and delegation that landed at Kushinagar on Wednesday. Paying tributes to Maharshi Valmiki on the occasion of his birth anniversary, the Prime Minister said that the country was marching ahead on the path of “Sabka Vikas with the help of Sabka Sath and Sabka Prayas”.

Modi said that the airport will benefit farmers, livestock farmers, shopkeepers, workers and entrepreneurs while creating job opportunities for scores of youths in tourism and hospitality sectors as well as related industries.

Speaking on the occasion, Chief Minister Yogi Adityanath expressed his gratitude to the Prime Minister for his role in the development of Buddhist sites and said that the PM has realised the vision of the Buddhist circuit. CM Yogi said that the Kushinagar airport will bring about positive change to the lives of five crore people of the region.

Yogi Adityanath said that from 1947 to 2014 only two airports were functional in Uttar Pradesh, including Lucknow and Varanasi while the connectivity of Uttar Pradesh was confined to around 16 cities. “But, today Kushinagar Airport has become operational as the 9th airport of the state whereas there is direct air service from the airports of Uttar Pradesh to 75 major cities.

He said that Kushinagar, being the place of Mahaparinirvana of Lord Buddha, is the centre of deep faith and reverence for Buddhist followers all over the world. Humanity will remain indebted to Tathagata for the messages of friendship and compassion that he gave to the world, CM said, quoting a line from PM Modi’s one of the speeches in UN, “The countries of the world have given war while India has given Buddha.”

With regard to the UDAN scheme, Yogi said: “The honourable prime minister’s purpose behind the scheme was to ensure that even those wearing ‘hawai chappals’ (slippers) could also travel by plane. his has been made possible through improved air connectivity.”

CM Yogi said that work is underway on 11 new airports in the state, adding that it was going on war footing on Jewar International Airport as well as the airport at Ayodhya.

The International Airport of Kushinagar is very important for the people of eastern Uttar Pradesh as well as northwestern Bihar and neighboring Nepal, the CM said.

Direct flight between Kushinagar and Delhi from November 26

Scindia also said that 17 new airports will be built in UP in future.

Built at the cost of Rs 260 crore, the Kushinagar International Airport, boasts of longest runway with a length of 3200 metres and width of 45 metres, and can accommodate four big airplanes simultaneously.

(The above story first appeared on LatestLY on Oct 20, 2021 08:41 PM IST. For more news and updates on politics, world, sports, entertainment and lifestyle, log on to our website latestly.com).