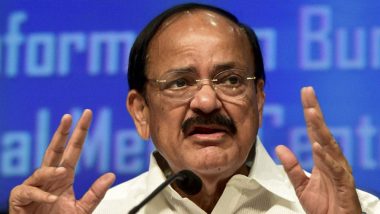 New Delhi, August 2: Ahead of "bhoomi pujan" of the Ram temple in Ayodhya, Vice President M Venkaiah Naidu said on Sunday that through this "historic" event the country is bringing the glory of the past alive and enshrining the values cherished by its people.

On a social media post, "Rebuilding the shrine, Enshrining the values", Naidu quoted Vedic scholar Arthur Anthony MacDonnell to say "Rama's ideas as told in the Indian texts are secular in origin, their influence on the life and thought of people having been profound over at least two and a half millennia." Ram Temple Bhoomi Pujan Ceremony: Stonework for Ram Mandir Reaches Final Stage Ahead of Foundation Laying Ceremony in Ayodhya.

In a couple of days we are going to witness a historic event at Ayodhya.

We feel blessed that we are building a temple for Lord Rama.

Talking about "Rama Rajya", Naidu termed it a metaphor used by Mahatma Gandhi to define a well-governed state and said it is based on a people-centric democratic governance founded on values of empathy, inclusion, peaceful co-existence and constant quest for a better quality of life.

Ahead of the August 5 "bhoomi pujan" ceremony to begin the temple construction, the vice president called it "an event that connects most of us to our illustrious cultural heritage.... It is indeed a moment of spontaneous celebration because we are bringing the glory of the past alive and enshrining the values we cherish."

"Indeed, this is a moment that could lead to a societal spiritual rejuvenation if we can understand the essence of Ramayana and understand it in the right perspective and see it as a tale that captures the unique Indian vision of Dharma or righteous behaviour," he said.

Defining Lord Rama as an "embodiment" of Indian culture, the vice president said he was the ideal King, an ideal human being. He combines in himself some of the finest qualities a human being can aspire to imbibe.

Relating teachings of the Ramayana, the story of life of Lord Rama, with Indian culture, Naidu said it gives a fascinating glimpse of the Ayodhya king's adherence to a set of values which includes truth, peace, collaboration, compassion, justice, inclusion, devotion, sacrifice and empathy. Ram Temple Foundation Stone Laying Ceremony in Ayodhya: LK Advani, Murli Manohar Joshi Yet to Get Formal Invites, May Attend 'Bhoomi Pujan' Via Video Conference.

"It is this set of values that are at the core of Indian world view," Naidu said.

As the rebuilding of the ancient temple in Ayodhya is going to start on August 5, the vice president said it would be good to understand and spread the universal message of the Ramayana and read this first Indian epic to understand the Indian thought and the richness of its cultural heritage.