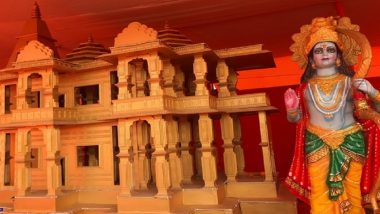 Belagavi, August 4: A Sanskrit scholar here, among the astrologers reportedly consulted for fixing auspicious date for the ground-breaking ceremony for Ram temple construction at Ayodhya, has complained of receiving threat calls following which he has been provided security by police.

N R Vijayendra Sharma alleged he had been receiving telephone calls regarding fixing the auspicious date. A police constable had been posted at the 75-year-olds residence here following a complaint he lodged with police in this district headquarters town in north Karnataka. Police on Tuesday said they were looking into the complaint. 'Ramarcha' Puja Begins in Ayodhya Ahead of Ram Temple's 'Bhumi Pujan'.

Sharma told PTI earlier this week that Swamy Govind Dev Giriji, a member of the Ram Janmabhoomi Teerth Kshetra Trust, had approached him regarding fixing muhurat for the ground- breaking ceremony.

Sharma, who was associated with Ramjanma Bhoomi movement for many years, said he had suggested four dates (July 29, July 31, August 1 and August 5) as the most auspicious days for performing Bhumi Pujan since all those days fall in Shravana month according to the Hindu calendar. On August 5, the auspicious time for the event will be between 8 a.m. to 12 noon, he said.