Stones Pelted at Police on Delhi-Gurugram Border After Workers Were Not Allowed to Enter Haryana, Watch Video 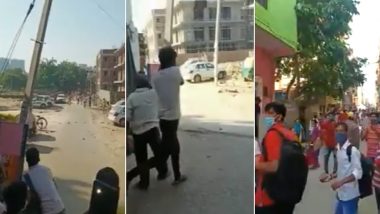 Gurugram, May 20: People pelted stones at Gurugram police near Palam Vihar on Thursday. The chaos erupted on Delhi-Gurugram allegedly after they were not allowed to cross the border into Gurugram. According to reports, people from Delhi mostly migrant workers wanted to go to Gurugram after all industries in the Udyog Vihar area resumed work. Haryana Lockdown 4 Guidelines: Intrastate, Inter-State Bus Services Begin Today, Here's What is Allowed And Not Allowed by Manohar Lal Khattar Govt.

The workers tried to enter Gurugram from Kapasera and Bijwasan areas. An FIR was registered in the matter. More details of the incident are still awaited. The Haryana government on Monday allowed Industries, e-commerce companies and other private establishments located in the orange and green zones. These industries can operate with 100 percent strength.

#WATCH Delhi: Locals pelt stones at police on Delhi-Gurugram border near Palam Vihar, allegedly after they were not allowed to cross the border into Gurugram. More details awaited. (Note - Abusive language) pic.twitter.com/FZ9PKInsuf

As per the new order by the Haryana government, officials of state health department and district administration should carry out demarcation of areas of containment and buffer zones. The state government allowed interstate and intrastate movement of goods and cargo.

The Haryana government also stared special buses take the passengers from the state to the railway station in New Delhi. Haryana Transport Minister Moolchand Sharma had said the government has decided to ply state transport buses between the state and New Delhi for the convenience of people. Online booking can be done through the portal hartrans.gov.in, and the passengers with a confirmed booking will be allowed to enter the bus stand.

(The above story first appeared on LatestLY on May 20, 2020 12:53 PM IST. For more news and updates on politics, world, sports, entertainment and lifestyle, log on to our website latestly.com).