Road accidents are on the rise in Tamil Nadu after the opening of TASMAC liquor shops following relaxations in lockdown, a senior doctor has said. 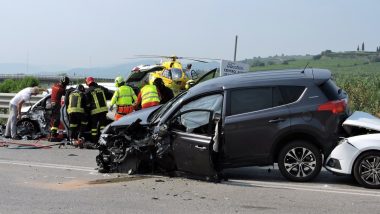 Chennai, June 17: Road accidents are on the rise in Tamil Nadu after the opening of TASMAC liquor shops following relaxations in lockdown, a senior doctor has said.

In Stanley Government Medical College, Chennai, there is a large number of cases brought for surgery and ninety per cent of these cases are due to road accidents.  Tamil Nadu: TASMAC Sold Rs 164 Crore Worth of Liquor in Just One Day

A senior orthopaedic surgeon with the hospital while speaking to IANS said, "Most of the accident victims who are brought to the hospital were in an inebriated stage. I can assure that there is an increase of more than 60 per cent cases ever since the liquor shops were opened in the state.

Former Union Health Minister, Member of Parliament and PMK leader, Dr Anbumoni Ramadoss had called upon the Tamil Nadu government to shut the liquor shops in the state. He said that five youths were killed in drunken brawls across the state on the day the TASMAC liquor shops were opened.

With increasing accidents and street fights under inebriated conditions leading to murders, the demand for closing the shops is on the rise.

However, Tamil Nadu government is unlikely to resort to such measures like shutting the shops. Chief Minister M.K. Stalin had said that TASMAC liquor shops were opened after incidents of illicit brewing and wide scale smuggling of liquor from adjacent states were reported.

(The above story first appeared on LatestLY on Jun 17, 2021 12:26 PM IST. For more news and updates on politics, world, sports, entertainment and lifestyle, log on to our website latestly.com).