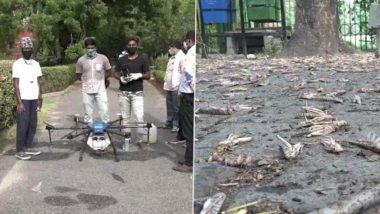 Agra, June 30:  Farmers have been hassled by the tiddi dal invasion over the last few months. In Agra, drones were used for spraying insecticides as swarms of locusts arrived in the district on Tuesday. According to an ANI update, SN Singh, Assistant Director, Agriculture Department said, "Around 60 percent of locusts were killed, 4 drones given by the central government are being used to spray insecticides".

BR Kadwa, deputy director of Rajasthan agriculture department, last week, said that Pakistan has become the breeding ground of desert locusts. He said that the new swarms of new locusts are coming from the neighbouring country. Rajasthan is one of the most affected states as some districts, share border with Pakistan from where locusts are entering other districts," said Kadwa.

(The above story first appeared on LatestLY on Jun 30, 2020 11:34 AM IST. For more news and updates on politics, world, sports, entertainment and lifestyle, log on to our website latestly.com).