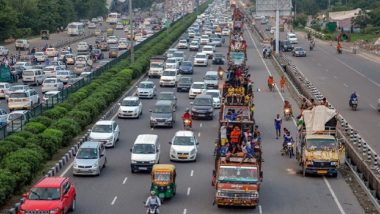 New Delhi, June 26: The Ministry of Road Transport and Highways on Friday issued a notification for an amendment to FORMs 1 and 1A of Central Motor Vehicles Rules 1989. The amendment will enable citizens with mild to medium colour blindness in obtaining a driving license. The notification was drafted in March this year. Road Transport Ministry Helping Needy, Poor Amid Covid-19 Lockdown.

After the formation of the draft, ministry officials had told ANI, “Being sensitive to the issues raised and considering the demand of such citizens, the Ministry has issued a draft notification GSR 176 E, dated March 16, 2020 for amendment to Form 1 and 1A of Central Motor Vehicles Rules 1989 for soliciting comments and suggestions.”

Notification issued for amendment to FORMs 1 and 1A of Central Motor Vehicles Rules 1989 for enabling Citizens with mild to medium colour blindness in obtaining driving license: Ministry of Road Transport and Highways pic.twitter.com/UET2cGydlh

The draft was formed after consulting medical experts. Officials added, “It had been reported that the citizens with a certain degree of colour blindness can be provided with driving license and this is being done in many countries of the world.” The draft norms were prepared after ophthalmologists from the All Indian Institute of Medical sciences suggested its positive recommendations. As per the ministry, the certification of medical fitness regarding the applicant's colour vision is mandatory.

(The above story first appeared on LatestLY on Jun 26, 2020 03:56 PM IST. For more news and updates on politics, world, sports, entertainment and lifestyle, log on to our website latestly.com).