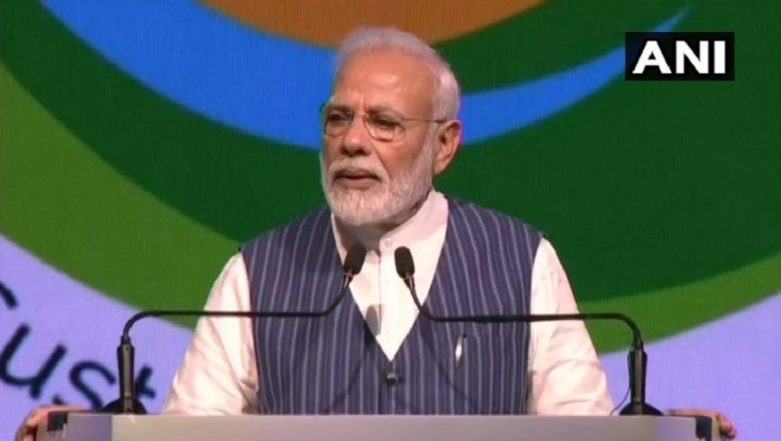 New Delhi, September 9: Prime Minister Narendra Modi on Monday addressed the 14th Conference of Parties (COP14) to United Nations Convention to Combat Desertification (UNCCD). The anti-desertification meet of the UN was underway in Greater Noida. In his inaugural address, Modi announced that India would soon put an end to the usage of single-use plastic. Other nations, he added, should also replicate the resolve.

"My government has announced that India will put an end to single use plastic in the coming years. I believe the time has come for even the world to say goodbye to single use plastic," PM Modi said. Amazon And Flipkart Set Deadlines to Stop Use of Single-Use Plastics in Packaging.

The Prime Minister's reiteration of his resolve to end single-use plastic in India was on the cards ahead of his address. Executive Secretary of UNCCD, Ibrahim Thiaw, said the Indian officials have already indicated that Modi would be making a "good announcement" during his address.

Apart from ending the menace of plastics, Modi said the Indian government is striving towards rapid reforestation to prevent degradation of land.

"It would make you happy that India has been able to increase its tree cover. Between 2015 to 2017, India’s tree and forest cover has increased by 0.8 million hectares," he said.

"I would like to announce that India would raise its ambition of the total area that would be restored from its land degradation status, from 21 million hectares to 26 million hectares between now and 2030," the PM further added.

Notably, the COP, which began on September 2, has the participation of 196 countries along with the European Union (EU). Nearly 8,000 people are attending the 14th Conference of Parties currently underway in Greater Noida.