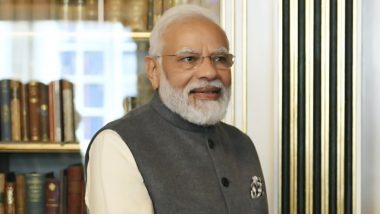 He said the youth of Uttar Pradesh have the ability to give wings to the dreams of corporates and businessmen.

"Your dreams will be realised by the commitment and passion of the youth," he stated.

Addressing the Third Ground Breaking Ceremony here, the Prime Minister said, "We are the fastest-growing nation among other G-20 countries. Our government followed the mantra of reform, perform and transform."

He said that policies were now being made with a vision for the future and added, "In the past eight years, we worked to strengthen the digital revolution. We brought in policy stability and erased irrelevant laws." UP Global Investors Summit: Yogi Government Gears Up for 3rd Ground-Breaking Ceremony.

The Prime Minister said that the next 25 years would be 'Amrit Kaal' where new goals and new efforts would propel the country towards higher heights.

He said that the investment in Uttar Pradesh would benefit the new generation the most. "The investment of Rs 80,000 crore will bring thousands of job opportunities for the youth and write the growth story of the state," he added.

The Prime Minister further said the global scenario was bringing new opportunities and India was emerging as a dependable friend because it has the capabilities. He added that India's potential and performance was being appreciated.

He said that after a gap of almost 37 years, people had re-elected a government in Uttar Pradesh which speaks volumes about the performance of the Yogi government.

The Prime Minister said that the government had decided to develop five kilometres on the banks of the Ganga River as a corridor for organic farming.

He asked the investors to focus on agriculture and food processing sectors which would bring massive opportunities.

"We got rid of unnecessary laws," he said, adding the double-engine government of the BJP has accelerated the growth of the state.

Lauding the state government, the Prime Minister said that as an MP, he had interacted with the state bureaucracy and found them to be able and work-oriented. "My faith in them has increased and I congratulate all government employees for their work," he added.

The Prime Minister also invited the investors to visit Varanasi which is his parliamentary constituency.

"You must visit Kashi and see the new look of the city that has preserved its heritage," he said.

Earlier, Chief Minister Yogi Adityanath thanked the Prime Minister for his vision and guidance that has given wings to Uttar Pradesh.

Defence Minister Rajnath Singh said that the state had changed during the regime of Yogi Adityanath and the guidance of the Prime Minister.

(The above story first appeared on LatestLY on Jun 03, 2022 01:54 PM IST. For more news and updates on politics, world, sports, entertainment and lifestyle, log on to our website latestly.com).