A well-marked low-pressure area over Saurashtra is likely to intensify into depression by Saturday night while tracking west-northwestwards. 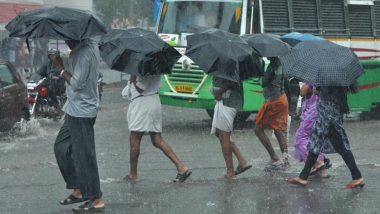 New Delhi, August 12: A well-marked low-pressure area over Saurashtra is likely to intensify into depression by Saturday night while tracking

west-northwestwards. After that, the system will not intensify further and will most likely remain stagnant off Saurashtra or move slightly westward away from the Indian coast before the first half of next week.

Meanwhile, as of Thursday night, a cyclonic circulation has been centred over the western parts of Gangetic West Bengal and the neighbourhood.

An off-shore trough running from Saurashtra to the Kerala coast is expected to produce widespread rain, mainly over the west coast of South Peninsular India in this period. Delhi: Water Levels of River Yamuna Rise After Heavy Rains, People Advised Caution

by Friday night as tracking west-northwestwards, which will lead to renewed rainfall activity from Saturday onwards over Odisha and its adjoining area. The centre of the activity is likely to transition to the west, producing very heavy rainfall (≧115mm/day) over Odisha from Saturday to Sunday, East Rajasthan and West Madhya Pradesh on Monday, and East Madhya Pradesh and Vidarbha on Sunday and Monday.

(The above story first appeared on LatestLY on Aug 12, 2022 10:03 AM IST. For more news and updates on politics, world, sports, entertainment and lifestyle, log on to our website latestly.com).