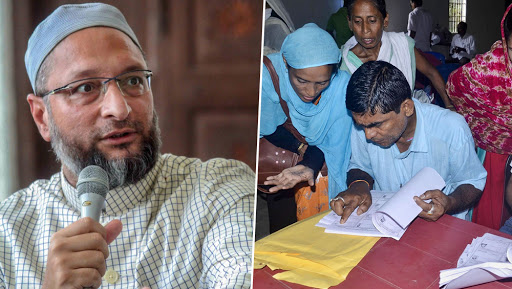 Hyderabad, August 31: Hours after the final National Register of Citizens (NRC) list was released, AIMIM chief Asaduddin Owaisi hit out at Narendra Modi government and said that Bharatiya Janata Party should learn a lesson and stop asking for NRC throughout the country in terms of Hindus and Muslims. Taking the case of Assam, where over 19 lakh people have been excluded, Owaisi stated that the myth of illegal migrants had been busted.

Expressing his opinion on the latest Assam NRC list, the AIMIM president said, "BJP should learn a lesson. They should stop asking for NRC throughout the country in terms of Hindus & Muslims. They should learn from what has happened in Assam. The so-called myth of illegal migrants has been busted." NRC Final List Not Red Letter For Assamese as Many Genuine Indians Are Left Out, Says Assam Minister Himanta Biswa Sarma

Earlier, the Assam NRC list was released by the government after revising it and excluded a total of 19,06,657 people. However, it stated that they had included 3,11,21,004 people as Indian citizens in the final list. Following the release of the final list, politicians have been raising concerns over the process of identifying the genuine citizens.