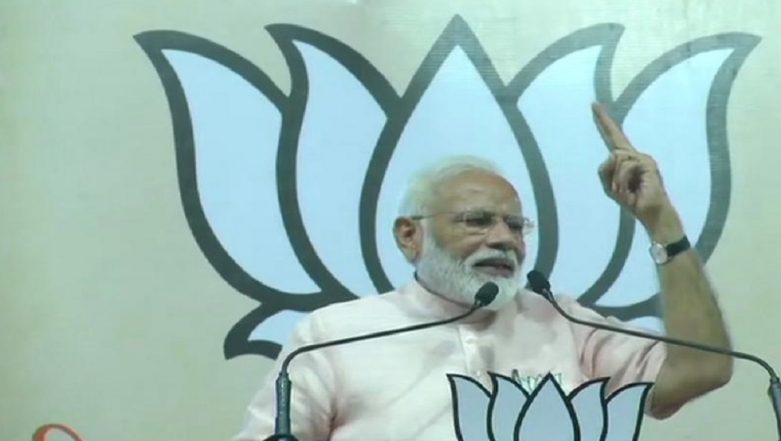 Varanasi, May 14: With the Lok Sabha elections entering the last phase, all eyes are now on Varanasi, the constituency of Prime Minister Narendra Modi, who is seeking re-election from here.

BJP is set to use all its resources to ensure Modi's victory with a big margin in this constituency which he won last time by bagging 3.37 lakh votes more than his nearest rival, Aam Aadmi Party (AAP) chief Arvind Kejriwal. Lok Sabha Election Result 2019 Predictions by Satta Bazar: BJP May Win Over 240 Seats, Congress 80, Say Matka Players in MP, Rajasthan And Gujarat.

Ajay Rai of the Congress, who forfeited his deposit in the 2014 elections, is the main rival against the Prime Minister this time. Polling in this constituency will take place on May 19, marking the seventh and last phase of the mega electoral exercise.

BJP President Amit Shah has already reached Varanasi and will be in the constituency for the next four days. He will meet party workers and give necessary instructions for the polling day. He will campaign in various constituencies during the day and return to Varanasi in the evening to take stock of the progress of campaigning here.

Although there is no doubt about the result of the Varanasi Lok Sabha seat, the question is mainly about the margin of victory for the Prime Minister.

"This time Prime Minister Narendra Modi will double his margin and we are all working towards this. There should be no complacency in mobilising voters. He has changed the face of Varanasi and the development is there for all to see," said Vijay Bahadur Pathak, BJP General Secretary.

The BJP has started a ‘Knock the door' campaign in Varanasi to seek votes for the Prime Minister. Over 10,000 BJP leaders and workers from Gujarat, Madhya Pradesh and Delhi have arrived in Varanasi to help in the campaign.

The campaign has been started at the behest of Shah who will be monitoring its progress every day till the campaign ends.

"Our workers will visit every home in Varanasi with voters' slip and convince people to cast their votes. People usually become complacent when they know that their candidate -- Prime Minister Narendra Modi in this case -- is winning but we are working for a much bigger margin of victory for the Prime Minister," said a local BJP leader.

According to sources, every party worker has been entrusted the responsibility of visiting 10 homes. The workers will be required to furnish details of the homes they visit.

On the other hand, the Congress is also making a determined bid to defeat Modi. Congress leaders are making hectic preparations for the road show of Congress General Secretary Priyanka Gandhi Vadra on Wednesday.

Rai is confident that Priyanka's road show will prove to be a game changer for him.

"There is so much enthusiasm in the people for the Congress. I can see that changing situation," he told IANS amidst campaigning.

"In 2014, there was a Modi wave in the country and no one spoke a word against him. Now, in Varanasi, people are disillusioned with his performance. There is unemployment, economy is in tatters, temples have been broken and the Ganga is as dirty as ever," the Congress candidate said.

"The promises he (Modi) made in 2014 have not been fulfilled. The media may be showing a different picture but the ground reality in Varanasi is not as rosy as is shown on television," Rai added.