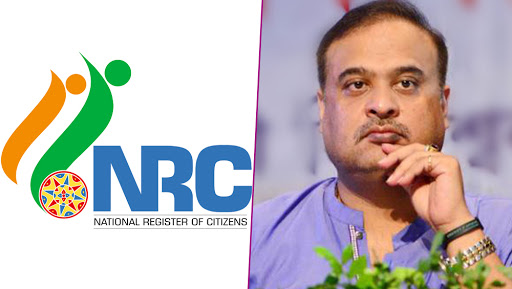 Guwahati, August 31: With the Assam final list of National Register of Citizens or NRC of Assam gaining political momentum, state Minister Himanta Biswa Sarma on Saturday stated that Bharatiya Janata Party stands by the legal Hindu migrants who were excluded in the final list. Sarma also called the list as "faulty" and noted the ruling BJP would approach the Supreme Court again to seek re-verification in certain parts of the state. AIUDF MLA Ananta Kumar Malo's Name Missing in Assam NRC Final List.

Earlier on Saturday morning, the final NRC list was released by the administration where 19,06,657 persons excluded and a total of 3,11,21,004 included in the out of 3,30,27,661 applicants. Among the most prominent name excluded from the list include former President Fakhruddin Ali Ahmed’s family. Expressing his opinion on the released final NRC list, Sarma said, as reported by India Today, "BJP will stand by legal Hindu migrants, and we will pursue their cases so that we can later extradite the illegal ones to Bangladesh." NRC Final List 2019: How And Where to Check Names in National Register of Citizens For Assam.

However, the state Minister even claimed that the exclusion should have been more. Sarma said, as news agency ANI quoted, "It should've been a little more as we had evidence of legacy data manipulation. We thought re-verification will be ordered. But it didn't happen. I think the number is a bit conservative, it should have been more."

Assuring the people that the state government will appeal to the Supreme Court against the exclusion. He said, "We'll continue to pursue our case before the Supreme Court that in bordering districts 20 per cent re-verification should be ordered and in remaining districts, 10 per cent re-verification should be ordered because we've found the manipulation of data, we've clear evidence with us." NRC Final List 2019: What Next For Assam Residents Whose Names Not Included in National Register of Citizens

The revised NRC list is the second one after the first was published in the country after 1951. The NRC for the people of Assam came after the state witnessed a six-year-long movement between 1979 to 1985 seeking detection and deportation of illegal migrants from Bangladesh. NRC Final List Not Red Letter For Assamese as Many Genuine Indians Are Left Out, Says Assam Minister Himanta Biswa Sarma