Verka is a Valmiki community leader, while Gilzian represents the other backward classes. The others are Jat Sikhs. Two-time MLA Kuljit Nagra (Fatehgarh Sahib) was a frontrunner for a Cabinet berth. His name was dropped at the last moment despite his proximity with Rahul Gandhi. 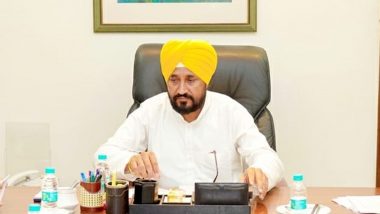 Chandigarh, September 26: Ahead of Assembly elections slated in February-March 2022, new Punjab Chief Minister Charanjit Singh Channi, expanded his council of ministers on Sunday with induction of 15 ministers, including six first-timers.

Several ministers from the previous Amarinder Singh government were retained including both women ministers Aruna Chaudhary, who is related to Channi, and Razia Sultana, a prominent Muslim face.

Verka is a Valmiki community leader, while Gilzian represents the other backward classes. The others are Jat Sikhs. Two-time MLA Kuljit Nagra (Fatehgarh Sahib) was a frontrunner for a Cabinet berth. His name was dropped at the last moment despite his proximity with Rahul Gandhi.

However, Nagra and Gilzian were recently picked as Working Presidents of the state unit. Pargat Singh, an Akali Dal rebel, is the hockey Olympian-turned-bureaucrat-turned-politician. He was appointed as the state General Secretary. Kotli and Warring began their political career by working as a student union leaders.

Kotli's grandfather, the late Beant Singh, was the Chief Minister from 1992 to 1995. His father Tej Parkash Singh served as the state Transport Minister. Handpicked by Rahul Gandhi, young leader Warring made his debut in the Assembly by defeating then People's Party of Punjab chief Manpreet Singh Badal, who is now in the Congress, from Gidderbaha in 2012. He was the Indian Youth Congress president in 2014.

Mohindra, Singla and Ashu, the prominent Hindu faces, are known for their proximity to Amarinder Singh. Shiromani Akali Dal rebel Badal, who was the Finance Minister in the previous Amarinder Singh government and in the previous SAD government led by Prakash Singh Badal, played a crucial role for getting Channi at the helm owing to his proximity with Rahul Gandhi. He is likely to retain the same portfolio.

Former Irrigation Minister Rana Gurjeet Singh made a surprise comeback after four years despite objections raised by at least six legislators. He was inducted after at the expense of Nagra.

A minister in Amarinder Singh's Cabinet, he had stepped down after an alleged scam regarding allotment of sand mines. Channi, 58, was sworn in as Chief Minister on September 20 along with his two deputies -- Sukhjinder Singh Randhawa and O.P. Soni, both ministers in previous Council of Ministers.

Amarinder Singh resigned as Chief Minister on September 18 after months of political tussle with state Congress chief Navjot Singh Sidhu, saying he stepped down as he felt "humiliated".

Indicating that he is still keeping his political options open, he said he was talking to his friends before deciding on his future course of action.

(The above story first appeared on LatestLY on Sep 26, 2021 05:53 PM IST. For more news and updates on politics, world, sports, entertainment and lifestyle, log on to our website latestly.com).