Rahul Gandhi Says PM Narendra Modi Got a Woman to Defend Him on Rafale, Modi Calls It Insult to All Women 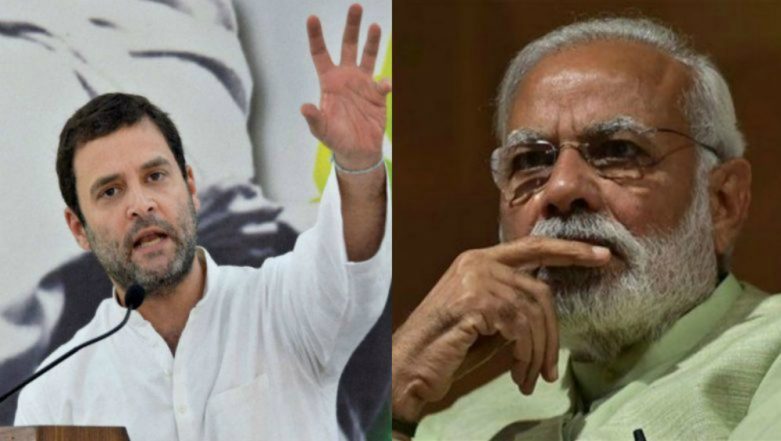 Jaipur/Agra, January 9: Congress president Rahul Gandhi Wednesday said the prime minister got “a woman” to defend him in Parliament as he couldn't do so himself, triggering a sharp retort from Narendra Modi for “insulting” Defence Minister Nirmala Sitharaman. But Gandhi remained unrepentant, saying respect for women begins at home. “Be a man and answer my question,” he told the PM on Twitter.

Calling Modi a prime minister who claimed to have a broad chest, Gandhi said the prime minister had "run away" from debate in Parliament on the defence deal. Nirmala Sitharaman Has Demolished Congress' Lies on Rafale, Says Amit Shah.

“The watchman with a 56-inch chest ran away and told a woman, Sitharaman ji, defend me. I won't be able to defend myself, defend me,” he said at a farmers' rally in Jaipur.

“For two and a half hours, the woman could not defend him. I had asked a straight question – answer yes or no – but she couldn't answer,” the Congress chief said, using the word ‘mahila' for a woman in his speech in Hindi.

Later in the address, he accused the prime minister again of running away from the debate, but this time did not refer to the defence minister in the same manner.

In his public meeting a few hours later in Agra, Modi accused Congress leaders of insulting the country's women. He said Defence Minister Sitharaman had floored the Opposition in the Lok Sabha by coming up with "fact after fact" on the Rafale deal.

"They are bent upon insulting a woman defence minister," he said, without naming Gandhi or mentioning the Jaipur rally.

"This is not an insult to a woman, but an insult to entire India's women power, for which these irresponsible leaders will have to pay the price," Modi added.

The prime minister said it was matter of pride that a woman had become defence minister for the first time in the country. Later, Gandhi went on Twitter in what appeared to be reaction to Modi's remarks. “With all due respect Modi Ji, in our culture respect for women begins at home,” he said.

“Stop shaking. Be a man and answer my question: Did the Air Force and Defence Ministry object when you bypassed the original Rafale deal?”

Former Rajasthan BJP president Arun Chaturvedi later demanded an apology from Gandhi for the manner in which he had referred to the defence minister. Rahul Gandhi had addressed his first public meeting in Rajasthan since the Congress came to power there, and in two other Hindi heartland states, after the recent assembly elections.

The Congress leader reiterated his party's promise to waive farm loans if it forms the government at the Centre after the Lok Sabha polls later this year. Gandhi repeated the Congress accusation of corruption in the deal for 36 Rafale aircraft being bought from French firm Dassault, a charge constantly denied by the BJP government.

The opposition leader claimed Modi failed to reply to the specific questions asked by him on the deal. He said the prime minister went off to Punjab when the Lok Sabha was debating the deal.

“Modi didn't step in the Lok Sabha for a minute because the chowkidar has committed theft, and ran away out of fear,” he said. He accused the prime minister of spreading hatred.

“The BJP's ideology is different from that of the Congress. We will fight against them, but we will pay respect, be it to the prime minister, a chief minister or any minister,” he said.

“Wherever there is a need to pay respect to them, the Congress party will do that. But if in the Rafale deal Narendra Modi stole 30,000 crore, justice will be done,” he said.

“There will be no victimisation, but there will be justice,” he said, in an apparent reference to the possibility of the Congress coming to power in the next elections.

Gandhi said a Congress government will waive farm loans if it comes to power at the Centre, but added this was not the final solution to the distress in the agriculture sector.

Loan waivers are just a small step towards helping farmers and a new “green revolution” is needed to address the problem, he added.

“A new strategy and planning is the need. In Rajasthan, the work of setting up food processing units will be started in every corner. Mega food parks will be set up and we will link your farm with the world economy and big cities of the world. We will provide technology in your farm and change your world,” he said.

The Congress leaders said the recently concluded assembly elections have shown Modi the power of the farmers.

“The farmers' power will have to be recognised,” he said. “India's biggest asset are the farmer and India's farmers can provide food to entire world, not only to India,” he said.