Rahul, Priyanka Gandhi, 3 Other Congress Leaders Allowed to Visit Hathras by UP Govt

The Congress cavalcade was stopped after it reached the UP-Delhi border. The officials subsequently informed the party leadership that a group of five leaders can visit Hathras. The restriction was applied in view of the Section 144 of CrPC imposed in the district. 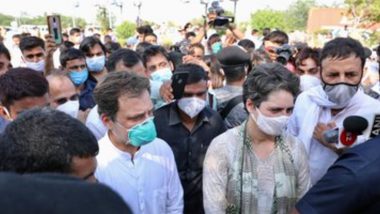 New Delhi, October 3: Five Congress leaders including Rahul Gandhi, Priyanka Gandhi Vadra and three other party members would be visiting Hathras in western Uttar Pradesh to meet the kin of Dalit teenager who was allegedly gangraped and murdered. The permission was granted by the UP government hours after it lifted the ban on media personnel from visiting Hathras district. Hathras Gangrape: Media Allowed to Enter Victim's Village, SDM Denies Reports of Kin's Mobile Phones Having Been Confiscated.

The permit for a five-member delegation was issued after a battery of party leaders and scores of workers reached the Delhi-UP border at the DND Highway. Nearly 200 police personnel were deployed to regulate the entry of vehicles in the state.

The Congress cavalcade was stopped after it reached the UP-Delhi border. Officials subsequently informed the party leadership that a only group of five leaders can visit Hathras. The restriction was applied in view of the Section 144 of CrPC imposed in the district.

Apart from Rahul and Priyanka, the three other Congress leaders part of the delegation are Adhir Ranjan Chowdhury, KC Venugopal and Randeep Singh Surjewala, said reports.

The visit to Hathras comes two days after Rahul and Priyanka, in their bid to enter the district, were briefly detained by the UP Police and charged under the Epidemic Act. No other politician has so far been allowed to visit the village, where the 19-year-old Dalit girl was allegedly sexually assaulted and physically tortured that led to her death.

The gruesome criminal incident was recorded on September 14. The case evoked nationwide outrage after the victim died at Delhi's Safdarjung Hospital on Tuesday. The UP government drew further flak after the girl's body was allegedly "forcibly" cremated in wee hours of Wednesday, with reports claiming that the family members were not allowed to remain present.

(The above story first appeared on LatestLY on Oct 03, 2020 04:10 PM IST. For more news and updates on politics, world, sports, entertainment and lifestyle, log on to our website latestly.com).