Union Minister of State for Home Nityanand Rai said in the Rajya Sabha that the Centre has not yet given its nod to change the name of West Bengal to 'Bangla' as it requires constitutional amendment and appropriate consideration of all relevant factors. 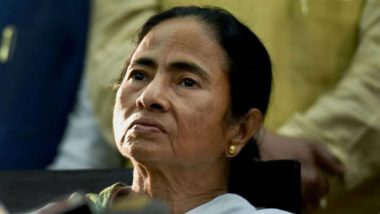 Kolkata, July 3: West Bengal Chief Minister Mamata Banerjee on Wednesday wrote to Prime Minister Narendra Modi, requesting him to accept her government's proposal to rename the state as 'Bangla' and get the necessary constitutional amendment effected for the name change done in the current parliamentary session. West Bengal Being Unnecessary Targeted in the Parliament: TMC.

Earlier in the day, Union Minister of State for Home Nityanand Rai said in the Rajya Sabha that the Centre has not yet given its nod to change the name of West Bengal to 'Bangla' as it requires constitutional amendment and appropriate consideration of all relevant factors.

The West Bengal assembly had on June 26 last year passed a resolution unanimously to change the name of the state to 'Bangla' in all three languages -- Bengali, English and Hindi -- and sent the proposal to the Union Home Ministry on August 21, 2018 for consideration.

"I would again request you to kindly accept the wishes of the people of West Bengal as enshrined in the resolution of the West Bengal Assembly and in the proposal of the West Bengal Cabinet to rename our state as 'Bangla' in English, Hindi and Bengali," Banerjee wrote.

"This rechristening will be in consonance with the history, culture and identity of our state and will reflect the aspirations of our people. I would request you to kindly get this amendment done accordingly in the current session of parliament," she wrote.

In the beginning of her letter to the PM, Banerjee said her government is seeking to change the name of the state for "quite a few years" as the present name "does not bear the testimony of the classical history" that West Bengal has.

After holding a meeting with all political parties represented in the state legislative assembly in 2011, the West Bengal government had proposed the state to be renamed as 'Paschim Banga' in both Bengali and English, but it was turned down by the Centre. West Bengal Announces 10 Per Cent EWS Quota in Govt Jobs.

in 2016, the state assembly had again carried a resolution, proposing the name of the state be changed to 'Bengal' in English, 'Bangla' in Bengali and 'Bangal' in Hindi. But the Union Home ministery had rejected it, saying the new name of the state would have to be the same in all three languages.

(The above story first appeared on LatestLY on Jul 03, 2019 11:15 PM IST. For more news and updates on politics, world, sports, entertainment and lifestyle, log on to our website latestly.com).