Presidential Election: VV Giri, Another President Who Was Born, Raised in Odisha

NDA presidential candidate Draupadi Murmu has brought back the memories of Varahagiri Venkata Giri, the fourth president of the country who also had an Odisha connection. 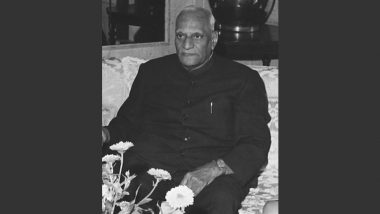 Berhampur, Jun 24: NDA presidential candidate Draupadi Murmu has brought back the memories of Varahagiri Venkata Giri, the fourth president of the country who also had an Odisha connection.

Popularly known as VV Giri, he was born and brought up in Berhampur city in Ganjam district. He died on this day in 1980. Presidential Election 2022: Droupadi Murmu Files Nomination As NDA Candidate in Presence of PM Narendra Modi, Union Home Minister Amit Shah

He defeated Congress nominee Neelam Sanjiva Reddy to become the president. He served as the third vice president of the country from 1967-69. Following president Zakir Hussain's death, Giri served as acting president from May 3 to July 20, 1969.

After completing his graduation from the Khallikote College, which is now a university, he went to Ireland to study law at the University College Dublin.

Though Giri was born and brought up in Berhampur, his political activities started in what was then Madras and he eventually became the Union labour minister, said JK Barala, former-vice chancellor of Berhampur University.

His parents hailed from East Godavari district in Andhra Pradesh and settled in Berhampur to practice as lawyers and take part in political activities, the professor in political science said.

The house where he was born is now a girls' high school named after him. The civic body also named a road here and an old market area after him.

"We're very much delighted as an Odia and a tribal woman from Mayurbhanj district is likely to be the president of the country," said Jayant Mohapatra, a former vice-chancellor of Berhampur University.