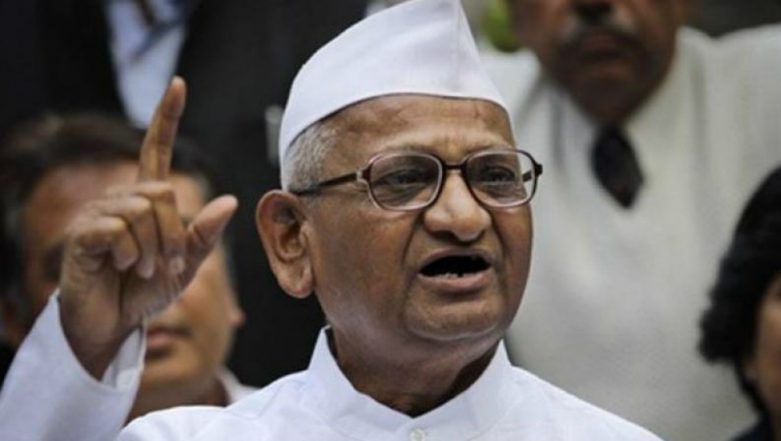 Ralegan-Siddhi, July 5: Social activist Anna Hazare on Thursday reminded Prime Minister Narendra Modi of "unfulfilled promises" and warned that if these were not implemented by October 2, he would resort to a fresh agitation.

Hazare said in the past four years he had written several times to Modi but did not receive an acknowledgement. In his latest directive to Minister of State in the Prime Minister's Office Jitendra Singh, he listed seven major unfulfilled or partly fulfilled promises made by the Centre after his week-long hunger strike in New Delhi in March.

While conceding that the main issue of Minimum Support Price (MSP) for farm produce has been accepted, he said that owing to the interference by the Central Agriculture Department, the recommendations sent by the State Agriculture Prices Commission were slashed.

Demanding the implementation of promised "autonomy" for the Agricultural Prices Commission, Hazare said this would ensure that farmers get the MSP based on the actual cost of cultivation.

Dwelling on the assurances of electoral reforms, he referred to the proposals of treating a candidate's photograph as his/her election symbol, the Right to Reject and if the votes in None of the Above (NOTA) were higher than the number of candidates, then re-elections, candidates securing less votes be debarred from contesting elections in future, and Right To Recall, which the government promised to forward to the Election Commission.

The next was the government's assurance that farmers aged over 60 years of age would be given a pension of Rs 5,000 per month, for which a committee would be constituted and its recommendations would be implemented, Hazare said.

He listed the long-pending promise on the appointments of Lokpal and Lokayukta for which a Selection Committee meeting headed by Modi was held on March 1 and after discussing the criteria, it decided to meet soon.

He also called for immediate consultations on the amendment of Section 63 and Section 44 that weakens the Lokpal, which the government had assured would be done.

"After breaking my fast, I have sent two reminders on all these assurances and the action taken to fulfil them, this is the third reminder. If these are not implemented by October 2, I shall be compelled to start an agitation in my village," Hazare declared.