In 2017 after graduating University, Angela came across the idea of network marketing and trading in the financial markets, which would ultimately give her the freedom she desired to pursue her passions while securing herself financially. Angela worked hard to master the skill set of trading and has now built a business with over 300 people and counting, called Pure Empire. 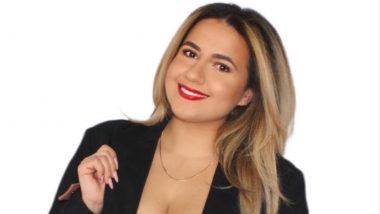 “The first and best victory is to conquer self.” Angela Guerrero, a 26 year old entrepreneur from New York City has truly embraced this ideology and manifested it into a success story. Finding herself, her voice, and her vision early on has guided Angela on her journey through entrepreneurship and led her to the financial independence she needs to now dedicate her time to helping others. Building her business from the ground up, Angela has brought new opportunities to the masses, sharing the tools needed to gain financial literacy and mastery of self.

Born and raised in New York City, Angela’s first employment was at a clothing store in Times Square. Coming from the city that never sleeps, Angela’s highschool life mirrored the city’s motto, working closing shifts at her job while balancing her education. Angela attended LIM College in New York where she received her Bachelor’s Degree majoring in business management and marketing, and minoring in fashion merchandising. Despite completing her post secondary education, for Angela, choosing entrepreneurship was never a question.

“My dad's an entrepreneur. He took the leap of faith to open up his own delis. Growing up with my dad, I always remember him working for himself and I knew that was what I wanted to do. I just didn't know how yet,” says Angela.

In 2017 after graduating University, Angela came across the idea of network marketing and trading in the financial markets, which would ultimately give her the freedom she desired to pursue her passions while securing herself financially. Angela worked hard to master the skill set of trading and has now built a business with over 300 people and counting, called Pure Empire.

When discussing the work she does through Pure Empire, Angela says:

“Our objective is to impact a million lives, helping them to create multiple streams of income. I want to show people that they can become entrepreneurs, it doesn't matter where they come from. We help people learn how to invest and achieve the highest level of financial literacy. We have consultants who can guide you through the entire journey. Ultimately, trading can help fund your dreams.”

At Pure Empire Angela and the team express and share their passion and belief in the importance of self development at the core. Angela instills in others her vision for becoming and creating fearless entrepreneurs.

“Self-mastery is the most important component to excelling not only in business but in life. We help people become self-sufficient leaders. We teach how to build self-awareness and help people with creating their vision for their future and what they truly want to see themselves accomplish. We make sure that our team doesn’t feel like they’re going through this journey of success alone,” says Angela.

To date, Angela has grown her business across the United States and into Europe and the Dominican Republic, and she plans to continue her global expansion. Working in an industry with individuals all over the world who have different perspectives than our own requires strong leadership is essential to thriving in this type of business. Angela's confidence, strong will and  dedication to developing leaders has helped her build her business to outstanding levels and elevate those around her to achieve the same.

“Growing up I learned from watching my dad that if you’re a good person who works hard, good things will come to you. My confidence grew as I always pushed my limits and forced myself to do things out of the norm, because I knew that if I had a goal for something bigger, it didn't matter what difficulties I was having at the moment, I had to make it work. Since then, I've always been really confident and I always think about the bigger picture,” says Angela.

Throughout the course of building her business Angela experienced difficulties similar to all entrepreneurs in network marketing, where others don't see or understand your vision. Angela has been able to overcome this barrier, learning to successfully overlook others’ lack of belief without allowing it to affect her self perception.

“A big barrier in building this business was a lack of support from friends and family.  When I first started this business I was so excited, I knew I had found something life-changing, but I was shot down pretty quickly by my friends and family. This quote I read has always stuck with me ‘once you accept someone's opinion of you, you accept their lifestyle’ - it made me really evaluate my current lifestyle and that of those people around me who were critical of me taking this leap to follow my dreams There was not one person around me who’s lifestyle I would trade for my own, so why should I take their opinions to heart? I learned to silence the noise around me, set goals and just lock in. And that's what I did, I ended up quitting my job to build this business,” says Angela.

As Pure Empire continues to grow with a capable and highly-motivated leader at the helm, there is no doubt that big things will continue to come from this business. As Angela has been able to become the master of herself and her mind, she has mastered countless skills in the process and built an impactful business from the ground up. Her best advice for the aspiring entrepreneur? Keep reading!

Find a mentor. “Stay locked in with them. Don’t be afraid to ask them for advice, they have what you want and can show you how to attain it for yourself.”

Go all in. “I truly believe that the reason that certain people aren't successful is because they're not all in - they have one foot in one foot out. You have to be completely tapped into this business. Be motivated by the desire to prove to yourself that you can do it!”