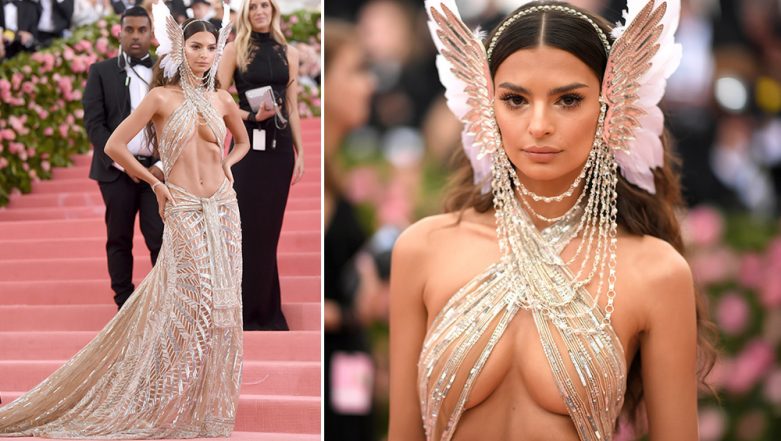 The Met Gala 2019 saw some of the best fashion ensembles coming out on the pink carpet. This year's theme "Camp: Notes on Fashion" was interpreted too well by the celebrities and it saw some strong sartorial choices donned at the event. Among all the stylish, bizarre and haute couture, Emily Ratajkowski also embraced a barely-there dress that attracted all eyes. While she looked like a lovely angel with wings on her face, it could also be called the most naked dress. Met Gala 2019 Red Carpet Live Updates: Deepika Padukone Poses With Priyanka Chopra and Nick Jonas at Met After-Party.

Emily Ratajkowski's dress was designed by Peter Dundas. It was a drapery silvery dress with a cutout at the torso region and the back open. Sparkling from head to toe and an attached headgear like wings attached to her ears, the attire had all eyes, but it looked like there would be a wardrobe malfunction any moment. Since the colour of the dress also matched with the skin tone and thus it looked like she wasn't wearing anything beneath the dress. Met Gala 2019: Harry Styles to Michael Urie, Male Celebs Who Said ‘F**k You’ To Toxic Masculinity with Their Androgynous Outfits (View Pics).

Emily Ratajkowski in a smoking hot Peter Dundas look at the #METGala. pic.twitter.com/JS0vm47Nrb

Fans of the actress were also impressed and few declared her a winner of the event too. People appreciated her slender figure and also how well she carried the outfit with confidence. Some have also called her perfectly resonating with Cher, the camp queen. Well, carrying such a daring outfit requires some courage and Emily Ratajkowski was flawless.