Missing the Ocean? These Sizzling Photos of Cristiano Ronaldo's Girlfriend Georgina Rodríguez in Bikini Won't Help But Too Hot to Ignore!

The pics of her sun-soaked holiday in Portofino has left her Instagram followers' jaws on the floor. As Georgina’s ultra-hot pictures are making the headlines, we bring you more photos of the model that won't help, if you are missing the ocean, but are too hot to ignore. 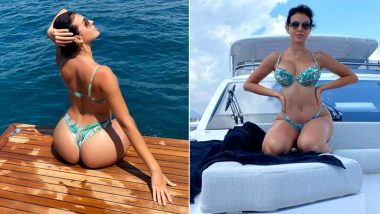 Christiano Ronaldo’s girlfriend, Georgina Rodríguez has taken hotness on another level, as she flaunted her impressive physique abroad a luxury yacht. The model was seen rocking in a bikini, while she was captured basking in the sun, before sitting on the edge of the boat. With the new pictures, the 26-year-old once again took the internet by storm, as she is enjoying private family time with the footballer and their kids on their luxury super-yacht. The pics of her sun-soaked holiday in Portofino has left her Instagram followers' jaws on the floor. As Georgina’s ultra-hot pictures are making the headlines, we bring you more photos of the model that won't help, if you are missing the ocean, but are too hot to ignore. Cristiano Ronaldo Showcases His Love for Girlfriend Georgina Rodriguez in Latest Instagram Post.

We are in the middle of a pandemic, and there are so many things we are missing, with the major being travelling. So when Georgina uploaded snaps of herself from the couple’s luxury super-yacht getaway, it was only natural for the social media users to react on the pictures. The loved-up couple has been sharing photos all week, after heading to the sea to enjoy some summer-time. In the pictures, the model seemed in high spirits, flaunting her perfect curves, and taking in the rays before the sun.

Here Are the Pictures

Those who follow Georgina on Instagram, by now knows that she is in love with her hunkey honey, but sometimes she loves to go out on her own for solo adventures. She is never shy about showing off, and her pictures are fabulous, and she flaunts her femininity. Here are some more photos of the 26-year-old model, travelling the world and giving fans a peek into her private life. Cristiano Ronaldo Wowed by Girlfriend Georgina Rodriguez, Calls Her ‘Most Beautiful Woman on Earth’.

Resting Under the Sun!!

Another From the Yacht!

The sizzling Georgina is sexy as ever. When it comes to bikinis, the beauty leaves little to the imagination and looks incredible in her perfectly curved figure. She started dating Ronaldo in 2016 and share daughter, Alana. The footballer is also a father to nine-year-old Christiano Jr. and twins Mateo and Eva.

(The above story first appeared on LatestLY on Jul 22, 2020 08:33 PM IST. For more news and updates on politics, world, sports, entertainment and lifestyle, log on to our website latestly.com).