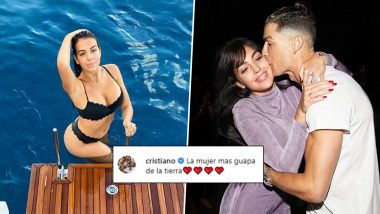 Cristiano Ronaldo is all love for his girlfriend Georgina Rodriguez as the five-time Ballon d’Or winner recently described the 26-year-old model as the ‘most beautiful women on earth’ after she posted a photo of her on social media. The couple are together since 2016 and also have a daughter together named Alana Martinez. The two-year-old is the youngest of Cristiano’s four kids. Cristiano Ronaldo Is Girlfriend Georgina Rodriguez’s ‘Best Teacher’, Instagram Model Admits Feeling ‘Ashamed’ Working Out With Him (View Pics).

Georgina Rodriguez took to social media to share a photo with her 18.9 million Instagram followers while letting her hair down with the Portuguese superstar on a £30,000-a-week yacht. ‘These are the little eyes that I put on the love of my life.’ The Spanish supermodel captioned her post. Cristiano Ronaldo and Georgina Rodriguez Spend Quality Time Together, CR7's Girlfriend Captions The Pic, ‘The Only Thing I Like More Than You is Us’.

The raging post got a beautiful response from boyfriend Cristiano Ronaldo which is suggestive of the special relationship the couple share. ‘You are the most beautiful woman on earth,’ commented the Juventus superstar under the photo which has already gained close to three million likes on the micro-blogging site.

Rumours of Cristiano Ronaldo and Georgina Rodriguez being engaged began to make waves after the model recently showed off a new diamond ring of her finger. The couple met at a Gucci store in Madrid, where Rodriguez was working as a shop assistant.

Speaking of Cristiano Ronaldo, the Juventus star scored his 30th goal of the season against Milan but couldn’t guide his side to a victory, which woolen have seen them stretch their lead at the top of Serie A table to 10 points. The 35-year-old recently became the first Juve player in 60 years to score 25 league goals.

(The above story first appeared on LatestLY on Jul 08, 2020 02:33 PM IST. For more news and updates on politics, world, sports, entertainment and lifestyle, log on to our website latestly.com).