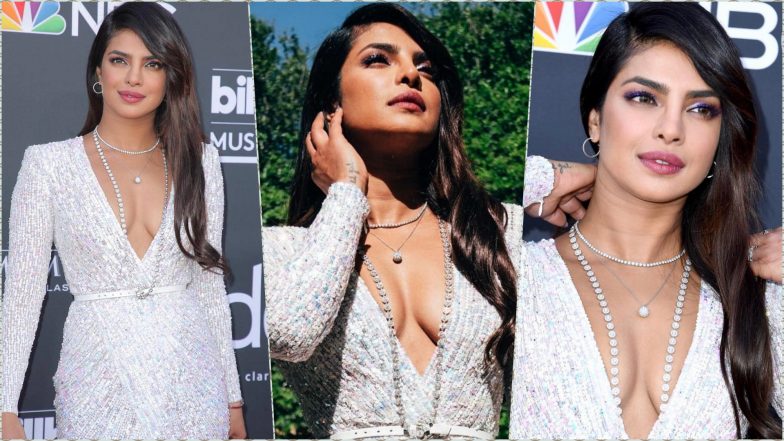 Las Vegas, May 4: If Priyanka Chopra Jonas looked like a million bucks at the Billboard Music Awards 2019 red carpet, it was courtesy her sparkling ensemble and glittering jewels, which were priced over a whopping Rs 1.8 crore. Priyanka made a stellar statement at the music awards in Las Vegas on Wednesday night. She chose a stunning white embellished Zuhair Murad Haute Couture gown reports pagesix.com. Priyanka Chopra Jonas Looks Ravishing in a White Dress Alongside Nick Jonas at the 2019 Billboard Music Awards Red Carpet – See Pics.

She started off with a pair of Tiffany & Co. diamond-studded hoop earrings worth $5,600 and a matching pavï¿½ bracelet for $12,000, both from the brand's T collection -- but the real bling was around her neck. The 36-year-old actress layered on Tiffany's HardWear Ball Pendant worth $11,000, Victoria Graduated Line Necklace costing $55,000 and Circlet diamond necklace for $165,000. Met Gala 2019: Which Designer's Outfit Will Priyanka Chopra Wear This Year?

Always a Sucker for Tiffany & Co.

She topped it all off with a trio of rings: a Tiffany T Wire Ring worth $2,300, T Two Chain Ring and another T-Wire Ring in white gold costing $850 and $825 respectively. She completed her look with a pair of nude PVC stilletos from Yeezy, priced safely close to Rs 50,000 and a Swarovski-embellished and feather bag worth $3,620.

On the acting front, the "Isn't It Romantic" star has wrapped up filming "The Sky is Pink", directed by Shonali Bose. She has also announced an India-set wedding comedy in which she will collaborate with writer-actor Mindy Kaling.