Mahatma Gandhi or Mohandas Karamchand Gandhi is not just a name from the Indian history, but he was a freedom fighter beyond words. 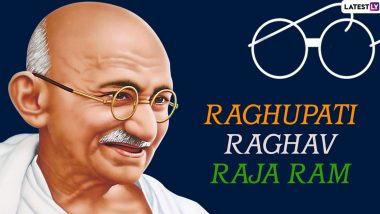 Mahatma Gandhi or Mohandas Karamchand Gandhi is not just a name from the Indian history, but he was a freedom fighter beyond words. His mantra seeking non-violence (ahimsa) made India free from the clutches of the British Raj. While Gandhiji is no more between us, his preachings are still valued and followed by generations. October 2, 2020, is celebrated as the birth anniversary (Gandhi Jayanti) of this legendary. Every year this particular date is celebrated with a lot of enthusiasm and joy in India and also marks a national holiday. And what a better day to remember some songs that evoke the emotion of pride for the Father of the Nation. Gandhi Jayanti Information: Significance of Father of The Nation, Mahatma Gandhi's Birth Anniversary in India.

Be it a Bollywood song, a simple prayer or a mesmerising melody, the songs we are about to mention below are full of emotions as well as depth which will surely make you feel the struggles Mahatma Gandhi had gone through. Take a look. Gandhi Jayanti 2019: Air India Paints Mahatma Gandhi’s Picture on Airbus A320 to Mark His 150th Birth Anniversary.

The lyrics of this song from Sanjay Dutt starter Lage Raho Munna Bhai are so strong that it will make you teary-eyed. The melody has Gandhiji’s teachings written all over it and that is why it's on the top of the list. Watch and listen.

Not a very popular song, but the meaning behind it is what makes it a special one. This one takes us through the reality of why Mahatma Gandhi is called the Father of the Nation. Have a look.

They say old is gold and up next we have a song from 1954 from the movie Jagriti. Dedicated to none other than Gandhiji, this song is sung by legendary Asha Bhosle and is still fresh in minds of many.

This one is quite a popular hymn in Gujarati composed by poet Narsingh Mehta in the 15th-century. This hymn also happened to be Bapu’s favourite. Listen to it.

Last but not the least, this is Gandhiji's favourite bhajan and will instantly remind you of him the moment you hear it. Many Bollywood movies have made a revamped version of this one, but the original is the best.

Gandhiji was born Porbandar in the year 1869 as Mohandas Karamchand Gandhi. His sacrifice for the nation will never be forgotten and he will live in the minds of every Indian forever. We wish you a Happy Gandhi Jayanti 2020. Stay tuned and listen to the songs above.

(The above story first appeared on LatestLY on Sep 30, 2020 03:11 PM IST. For more news and updates on politics, world, sports, entertainment and lifestyle, log on to our website latestly.com).